Origins of our fantasy games.

Even though I wargame the fantasy genre using the HotT (Hordes of the Things) wargames rules (and more recently the 'Kings of war' rules from Mantic), I haven’t traditionally been a reader of fantasy literature. As a university student I was a voracious reader of the sci-fi genre, but that was quite some years ago. My reading of the fantasy genre has really only included Tolkein, a little of John Norman’s “Gor” series (only a couple of books actually), and I guess that Frank Herbert’s Dune series came close as well.

Recently I discovered the writing of Helen Lowe. Helen describes herself on her blog as “a novelist, poet, interviewer and lover of story”. She lives in Christchurch, and has previously written books for a younger audience including ‘Thornspell’. In 2010  her first fantasy novel for an adult audience (‘The Heir of Night” Orbit Books, ISBN 978-0-356-50008-9) was published. Having followed Helen’s Blog (and taken some of her advice for aspirant writers) for some time I decided that I should read some of her work. It took a little while to track down a copy of ‘The Heir of Night’ (bookstores in post quake Christchurch are scarce, to say the least), but I finally found the book stocked in a great bookstore in Wellington. 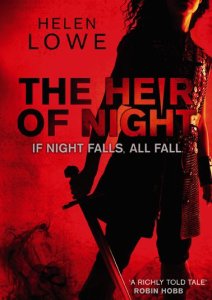 I found myself transfixed by ‘The Heir of Night’. Helen has created a fantasy world vaguely resembling (as many of them do) something slightly medieval, but a world that is wholly absorbing. Helen’s skill at creating such a world, her skill at story telling in fact, deserves to be compared not only with writers like Frank Herbert, but could in my opinion equally hold its own with writers of the stature of Tolkien. Her writing is lyrical where it should be, fast paced where it should be, and demanding of the reader’s concentration where it should be. In short, it is a damned good read. I could hardly put the book down. It is little wonder that the book has been nominated for two Gemmell Awards in London this year.

Even if you only vaguely thought that you might just possibly consider maybe reading something sort of akin to fantasy, READ THIS!!