While I hadn't planned a God in the VSF Turkish army, my reading on Turkish myth and legend (always a good place to start) had left me with the idea for a daemon a Djin.

When an advertisement for the Reaper Bones 'Shadow Daemon' popped up on Facebook I immediately thought.. a Djin, of course. The figure arrived pretty promptly from Mighty Ape, but had to wait a week or so for painting. All through the painting the words of Manfred Mann kept running through my head.

Anyway, here is the completed Djin. I chose to paint it in a daemonic style I learned from GW White Dwarf magazines, all putrifying flesh with purple and blue shadows. 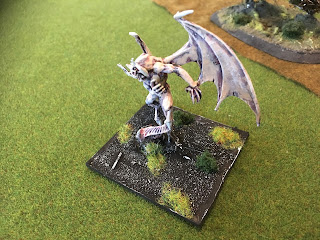 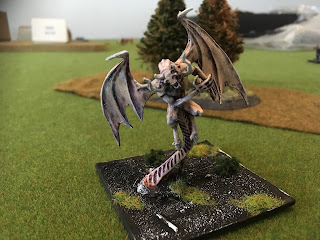 The presence of a God makes for yet another difference from what I hope will be a common opponent, the British VSF army. So the army now stands at 50 points. 22 points to go. Onwards and upwards.
at December 05, 2017 1 comment: