A bit of Argy bargy on the Dwarf/Human border

Things had not sat easy between the Dwarfs and their human neighbours. It had begun with crowds pushing and jostling at the weekly markets and finally erupted into open warfare as each tried to push the other away from their shared border. Humans and Dwarfs each pushed a small raiding force across the border into each other's territory, more of a show of force than anything, but one thing was for sure, blood would be spilled.

The humans take the initiative on their right, and charge into the woods taking a regiment of Dwarf Shieldbreakers by surprise. 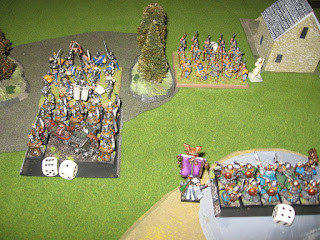 The battle isn't one sided however, and a troop of Ironwatch sends a foot archer regiment fleeing form the field on the dwarf right.

The Dwarf centre charges forward. There was another unit of foot archers sitting in front of the regiment of Dwarf Ironclad.. after a quick assault the archers flee. 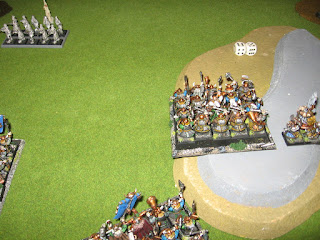 The human right has assaulted the Dwarf left, removing the Ironwatch who had been the last vestiges of a left flank. This left just the army standard bearer who as feeling very much alone. 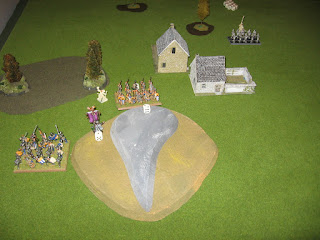 The Dwarf army standard bearer bounces off the wizard .. ouch. Meanwhile the Dwarf attack in the centre doesn't go to plan. The two regiments of Ironclad assault front and flank, causing a lot of casualties. This looked like a dead cert for a Dwarf victory, but . the nerve test roll is a double 1.. snake eyes.. the arquebusiers hold firm and the Dwarfs bounce back.. agghhh. 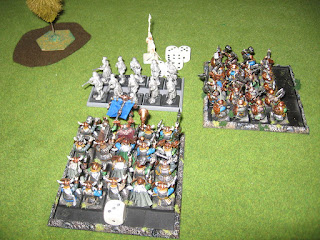 The human general attacks the Dwarf organ gun but bounces off... whew. 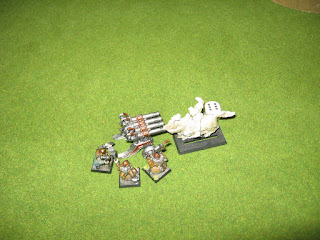 The victory goes to the humans. This was a 1000 point game, played (in case you hadn't guessed) using Mantic's Kings of War rules (we've been playing these for larger fantasy games since the original alpha test version came out several years ago). The human army under Andy's command had managed to work units with a points value in the Dwarf half of the board more than a 100 points greater than the Dwarf points in the human half.

While only a small game, it felt like a truly epic encounter, and anyway there was much beer, and many sausage rolls (well savouries actually) consumed.. a great night's 'gaming.

Pushing ahead on the Italian mainland ...

Italy, 1943, and the Italian army is still fighting. British forces are pushing slowly inland, looking for advantage amidst the broken Italian countryside. A piece of high round that dominates a round junction must be taken and a company of infantry have been tasked with pushing forward to take the position. The advance begins late in the afternoon.


The English push forward probing the position. An Italian machine gun opens up.


The English infantry open up fire from their covered positions

As the English continue to push forward more Italian infantry, and another machine gun, reveal themselves from positions covering the objective.


More Italian infantry reveal themselves as they open reactive fire from positions on the objective. However no fire results provide the opportunity for the English to push their advance.


So now the forces appear to have squared off. 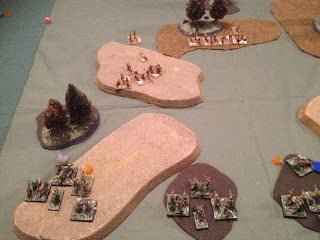 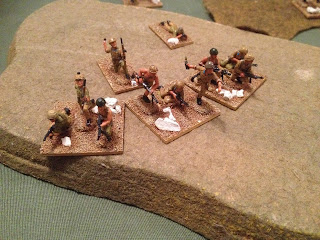 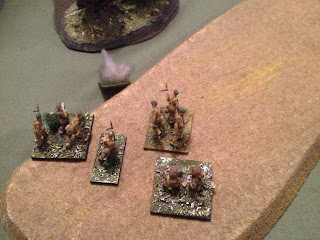 The English company commander commits a part of his reserve platoon to a striking advance down his right flank.
With movement temporarily stopped the English engage in a vigorous fire fight in their attempts to suppress the Italian defenders. 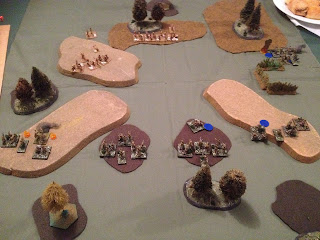 Fire on the Italian centre covering the objective from the woods begins to have an effect, the machine gun crew suppressed taking cover.

The English infantry right flanking manage to make it to cover and their fire, combined with that from the Italian front and supporting mortar fire, begins to have an effect as the Italians take casualties. However the last light is falling and while there is no longer any fire coming from the objective, the Italian forces have the position well covered. The attack will need to be renewed in the morning.

The game was played using Art Conliffe's Crossfire rules. The Italians were Andy's newly completed first platoon in their first outing on the table. As always with Crossfire games, the action accelerates with frequent changes of initiative as the forces close, making for an exciting encounter. There will be more as the English work to push the defenders on the Italian mainland back from the beaches.
at January 23, 2016 5 comments: