Holding the line at Letterhausen

Scchhhht "Niner this is One Zero Alpha, sitrep over" Scchhhht

Not even a radio squelch circuit could disguise a whispered nervousness

Scchhhht "Niner this is One Zero Alpha, figures three I say again figures three Bravo Mike Papa advancing across open ground to the west of our position, over" Scchhhht

Bloody hell, the old man himself. No-one quite knew how he managed to convey calm and confidence with three words over a distorted radio circuit.

Keith and I have fought quite a number of rollicking good adventures across the plains of northern Germany, all set in 1982 (ish), using the Modern Spearhead rules. You can see accounts of some of those games here. However it had been a while since the last outing, so despite being a little rusty with the rules, it was all on again. As always our armies are modelled using the Heroics and Ros range.

Normally I used an armoured regiment from one of the BAOR armoured brigades. This time however I decided to try something very different, and field elements of an infantry brigade. So it was that two battalions from 15th TA Brigade, with one armoured regiment from 1st Armoured division, were fielded in a hasty defence against Keith's Soviets. I used less artillery than usual, one battalion of M107s from Corps for CB, and the divisional  battalion of towed FH70 155mm guns. I took a salvo of ICM (Improved Conventional Munitions) for the artillery, and a minefield. I planned to try to channel the attackers and then catch them in a killing zone formed with ATGW and the Chieftains from the armoured regiment. I also took some entrenchments in the hope that the infantry platoons might be able to survive a little longer on the battlefield, although in an ideal world they would not bear the brunt of the battle. Finally I took as an Option A a flight of Lynx attack helicopters. My first error (of many) was the minefield. I had agonised over whether to take a minefield (and the required engineers) or a round of artillery delivered mines. I should have taken the latter, as in a hasty defence scenario it is deemed that the defenders have not had time to lay the mines, so those points are lost. So I lost the minefield 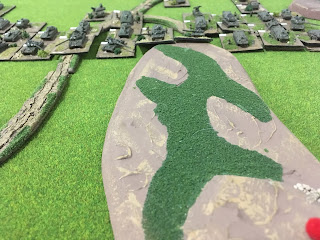 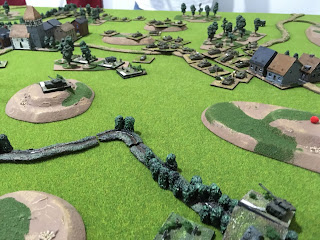 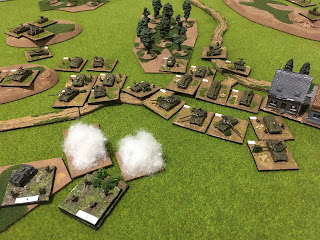 At this stage we ran out of time, at a time when the game needed perhaps several more turns to 'develop'.
My BAOR left flank battalion had failed to respond to a requested order change that would have allowed it to move across onto the flank of the Soviet attack. While response was likely, the slowness of the units would have meant a significant delay in their impact on the Soviet attack, if any at all.
However my right flank 'reserve battalion' had effectively halted Soviet progress with its cross fire on the flank of the attack. The sustainability of that positon in itself was suspect as Keith was beginning to manoeuvre BTR platoons into a position where they could bring ATGW fire to bear on the Chieftain troops.
Soviet casualties had been heavy, but were spread across 3 battalions, so none of them was too close to morale check. Interestingly both of us had made less use of electronic warfare missions than usual. We had both used radio jamming which had reduced the effectiveness of artillery as it was more difficult to get a request through. We had both located enemy artillery. However my FH70s were out of range of Keith's allocated guns, and I had failed to locate Keith's battalions because they were SPGs and so that much more difficult to locate.
In one turn, Chieftain troops accounted for four T64 platoons, and the Lynx had accounted for another two in its two turns over the table when we had to call time. The FV438s had yet to have any impact on the battle, and as support stands added significantly to the crossfire that was developing.
So for a change the BAOR effectively halted the Soviet advance. Perhaps the most interesting thing about this game for me was my exploration of a wider variety if weapon capabilities .. Improved Conventional Munitions in particular. A lesson was learned about the addition of mines to a Defend list as well - next time it will be Artillery Delivered Mines.
As always, a great game....
at October 03, 2020 No comments:

Oh I say, Weird science and all that, damned unsporting eh wot?

"Righto chaps, listen up. Seems the bally Bosche is up to some sort of silly scientific shenanigans again."

"Now now, Algy, let's not forget that we are the civilised ones here, eh? No need to bad mouth anyone, you know."

"Sorry suh. I just get a little carried away when I see anyone not playing by the rules, eh wot?"

So the scene was set and the armies of the imperial eagle and the union jack prepared to face off, the British intent on uncovering the deadly dastardly science in the strange industrial complex that rose up in front of them in the devastated landscape that was this weird world war 1. This was a HotT game played with our 20mm weird world war 1 armies, the first that Andy and I had managed for quite some time. 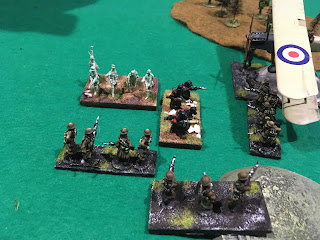 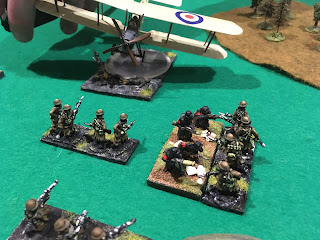 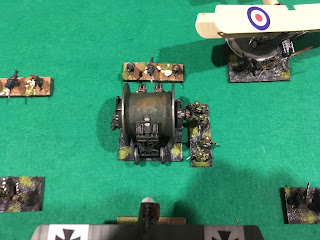 What a great game.. Andy created some serious pressure against the British centre (the behemoth) and I only managed a 'get out of jail' with a couple of lucky die rolls. Andy was also hindered by three low PIP die roles on turns 2, 3, and 4, which meant he could not take advantage of having positioned his aerial hero in my rear.
All in all, one of those games that went to the wire. It could have gone either way.