It was in 1971 that I first made contact with any kind of organised war gaming community in Christchurch. Good mate Pete and I had been pottering with model soldiers since 1969, partly as modellers ( I remember looking joyously at Pete's model ships.. his Airfix 'HMS Nelson' always took my fancy). I'd bought a few of those Meccano magazines that had some of the Charles Grant Series 'Battle" (soon reprinted as his famous book of that name) but we'd really only toyed with the ideas (forgive the pun).

I can't recall which one of us spotted the advertisement in the Christchurch Star Newspaper encouraging people to come along to an address in Hills Road if they were interested in table top wargames one Saturday.

So along we went, and there we met some real characters. The garage at the bottom of the dip in the drive way belonged to the parents of Barry Taylor, and he and Dave Crawford (as he was then known) demonstrated a world war 2 game fought using Dave's home grown rules. From this a small group varying numbers evolved but it wasn't long before the group split. Five of us were left: Barry Taylor, Malcolm Dennis, Pete, Errol Hooker and me. There was always 'the other group' featuring names such as Roly Hermans, Chris Brown, and of course the ever present Dave Crawford. But the five of us were the core of the original Christchurch Wargaming Society.

Oh the tales we could tell, but most are no doubt boring unless you were there. A group of us travelled to Dunedin in 1975, met Al Duncan, discovered WRG ancients wargaming, and things were never the same again. Dave seemed to metamorphose with various name changes, but always wanting to write the perfect set of wargames rules, often with paradigms that rarely seemed to coincide with those of the rest of us. There was always a rivalry between the groups, and of course people went their various ways as jobs, study and careers took us all into life. The one constant amongst us was that we kept on wargaming. There have always been new models, new periods, new rules, but the people have been the constant in our lives. As with the army itself, fellowship counts for much. Human beings are gregarious creatures. We have all made good friends through our hobby, most of them friends for life.

I recall Dave writing a set of rules for the Battle of Britain, and the interesting thing was .. I thought they weren't too bad. However he was dissatisfied with them because the Germans didn't win often enough and so he took something fundamentally good and took it apart.

But he was always there. He was opinionated, but he was a real character on the local wargames scene, and I always found him a likeable fellow.

But this past year has seen a fundamental change in the landscape. Late last year Barry Taylor passed away after a brief struggle with cancer. I was sad. It was as if no-one noticed. My sense of indignation was fuelled by the fact that in my opinion he was a good man. He was a real gentleman, and he really was one of the two founders of organised wargaming in Christchurch.

And then I got a text on Wednesday night to say that Dave St Clair (the third iteration of his name) had passed away in Dunedin Hospital after a stroke. Dave had moved to Northland for health reasons, and then recently to Oamaru. I'd not had the opportunity to catch up with him on his return to the mainland of New Zealand. And Dave was the other founder of organising wargaming in Christchurch.

Dave left his mark on everyone he met. He had strongly held opinions, opinions that seemed to either sweep people up, or repel them. But they were what made Dave who he was.

I've had  along standing interest in the renaissance as  a wargames period, and partly acquired (form Stuart A, wargames friend from waaaaaaaay back), partly painted a Royalist ECW army many years ago. I fell out with the DBR rules (that's probably a couple of decades ago). 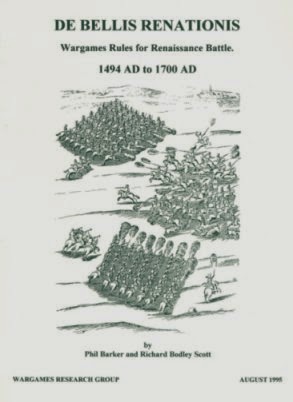 A couple of years back Keith introduced me to the condensed scale DBR (DBA sized games using DBR), and I clearly enjoyed them so much I sorted the basing of the entire Royalist camp (they'd been based in thin card, and my preference these days is for thicker bases that don't slide around as much, abut each other more easily etc.) I don't recall the games, but they obviously had an impact.

I hadn't got back to the rules since then, and when Keith suggested a game last Friday I suggested DBR. We played 300 points in a thoroughly enjoyable evening's game. Basically I had a ball (although that is as much to do with the company as the game), and it remind me of PRECISELY the reason I play games in the first place.

My own bumbling incompetence  alongside some good coaching from Keith, gave me a win, but that was immaterial and inconsequential in the context of the game. It was just damned good 'gaming.

I've been pottering with Armati rules for renaissance for a few years now.  This latest great experience in no way diminishes my liking for Armati. These are still good rules too. I was again pleasantly surprised at how much I enjoyed DBR. Interestingly I have enough ECW bases/figures that I could field a 300 point Royalist army AND a 300 point Parliamentarian army.

Matched opponents .. does it come any better?

So, more DBR looks to be around the corner.

US M10 AT support

I started the process of packing up the 'games room yesterday. Over the past few months I've been progressively sorting boxes, and discarding or giving away unwanted material. A lot of it fell into that most luscious of categories of 'aspirational purchases', a turn of phrase I've picked up from colleague, friend and wargames opponent Andrew T. I've also assembled/painted/completed quite a few of those kits/boxes of figures as well, so there is a lot to be said for aspirational purchasing.

As a consequence a number of projects have made a lot of progress, not the least of which has been the 20mm US 1944 force designed to play Spearhead (again these will double for the Korean conflict too). This project was a late comer to the wargaming stable, after I decided to make use of the US infantry that my son had painted up probably a decade or more ago to play Rapid Fire. We never did, so those troops had sat in the games room unused, hidden away in a box.

The project has required some additional purchases, and I've just completed what will probably be the last of the US armour, these two M10 tank destroyers which provide the AT component for the US armoured OOBs (Light and Heavy divisions). These are the Armourfast M10s, simple yet effective fast build models. I could have tried to detail them a lot more, put crew in the turrets etc (the open turrets certainly lend themselves to this) but at this stage I'm not really in the frame of mind for this. Maybe, one day .... I do have some of the necessary 'gubbins' in the spares box. 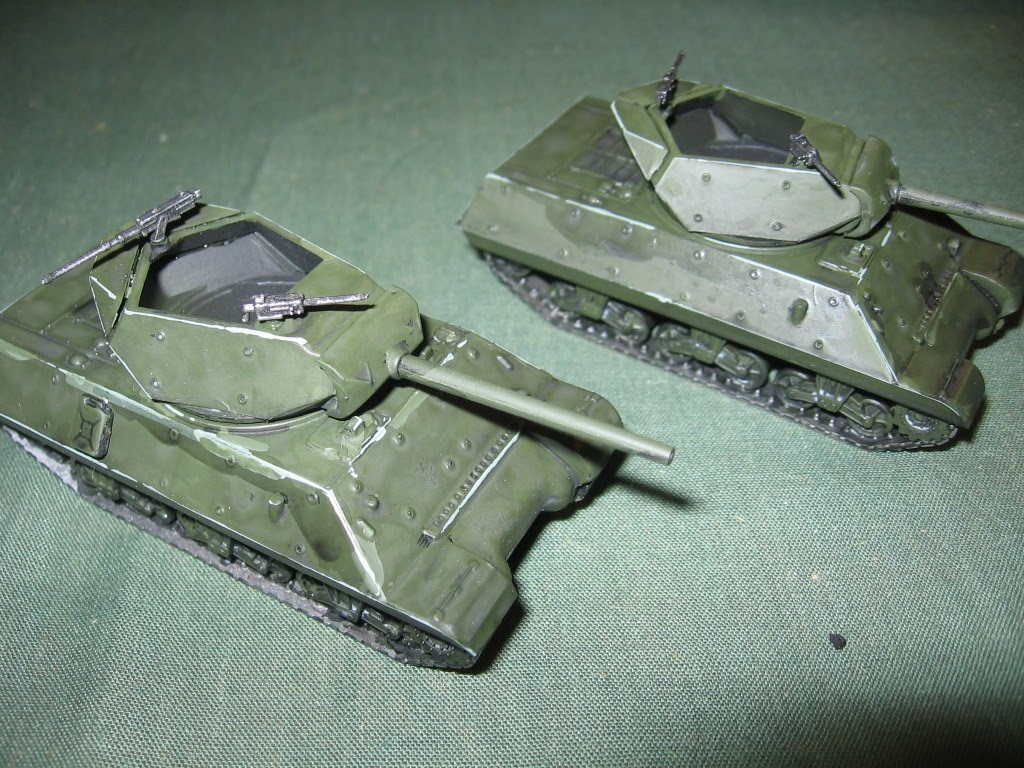 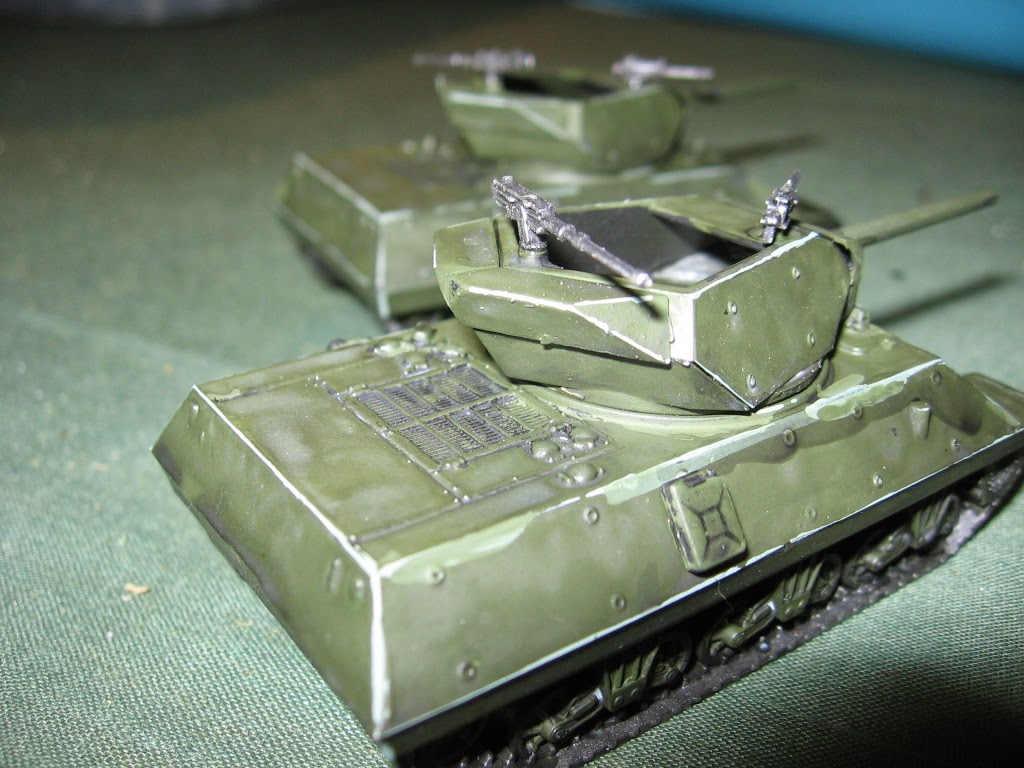 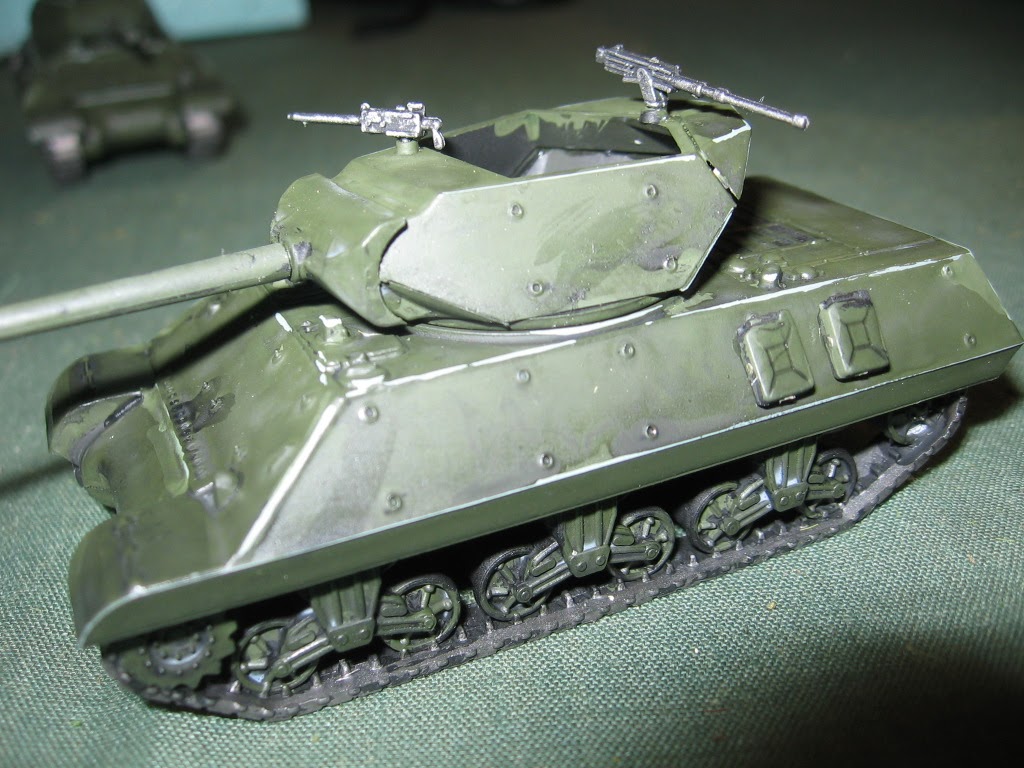 I do need to take a little more care when 'lining out' ... but things are a little rushed as our move looms on the horizon.

However one thing is for sure, the need to sort and pack has certainly had benefits in terms of the assault on that pile of lead and plastic. Predictably of course I have on several occasions given material away thinking I'll never use it, only to come up with a realistic use for it within a week or so .. those good old laws of the Universe, eh!!
at March 16, 2014 No comments: