Isn't it wonderful how projects ferment in our minds, often for quite some time. I've blogged previously about how war-gamers are so often already thinking three or more projects ahead. Well, this a project that I pondered and planned abut 7 years ago when I first took an interest in the GW game Warhammer 40k.

My attention was captured by the idea of an inquisitorial army, and I bought some Gray Knights, some Imperial Storm Troopers, and an Inquisitor etc for the army. I have used the army occasionally (I'm not a regular 40K player), but always at the back of my mind was an inquisitorial army that sued inducted Imperial Guard.

This week the opportunity arose to buy some IG figures, already painted, to add to the project.
Elliot, the painter/seller of the figures, has moved on to paint a VERY nice Vostroyan army, and felt that his paint job on his Cadians was not really up to the mark. He also just didn't use these guys any more (given the look of his Vostroyans I can see his point).

Well, I think he'd made  a pretty reasonable job of the figures, certainly good enough for me to use. They just need to have their bases finished. There are some extra figures yet to be painted, and some Storm Troopers that I'll need to repaint in their Inquisitorial red to match my existing figures. Here is the box 'au naturel', as I got it from Elliot. 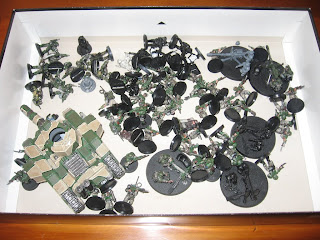 And a little more detail of a nice Leman Russ: I'll need to check whether or not I can use a Heavy Support choice with the inducted IG in the Daemonhunters' army too. 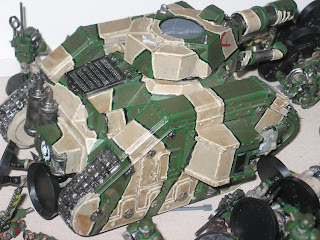 So, there's another project that has taken a step forward. Of course we could always argue that I should put more time, energy and money into the genres I play more regularly, but... hey, I'm a war gamer, and proud of it!!
at May 21, 2010 No comments: