The Soviet advance into West Germany must be halted. An armoured Brigade level task force from BAOR has been tasked with assaulting the Soviet spearhead ensconced across the Weser River, occupying the town of Neiderberg. Neiderberg can be seen as the large five sector town on the upper left of this photo of the battlefield, the BAOR attacking from the right.

Keith and I got together for the day to play this Modern Spearhead game, using his Scenario Generation System. 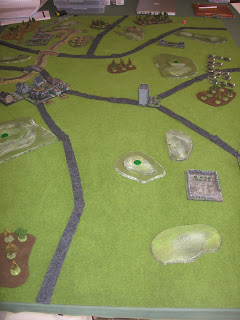 An under strength Soviet Motor Rifle Battalion had occupied Neiderberg. 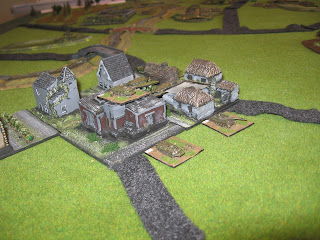 On the right flank of the impending British attack, hard against it's right flank Brigade boundary, another Motor Rifle Battalion occupied the high ground and woods on the flank. 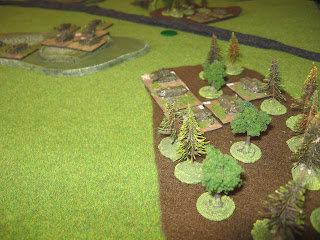 The British plan of attack involved a tank heavy mechanised battalion attacking towards the high ground on the right of Neiderberg. A Mechanised Infantry Battalion was to hold the British centre, taking high ground in front of Neiderberg. This battalion began taking fire from a battery of 120mm mortars, but was quickly silenced by counter battery fire from the battalion of Abbot SP guns in support of the Brigade. 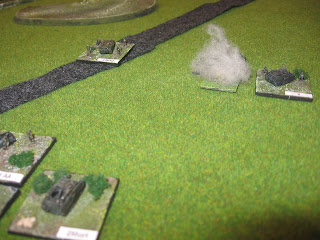 An infantry heavy mechanised battalion was to attack on the British left flank and take the high ground to the left of Neiderberg. 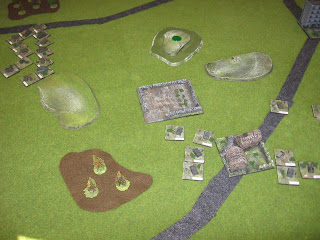 This British flanking movement brought the Soviet commitment of its reserve battalion of T64, attempting to attack the flank force in its own flank. They can be seen at the top of the photo below. 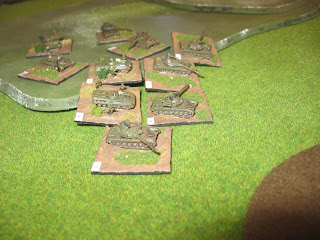 On the British right flank, the attacking battalion had reached its first objective, and paused. The Chieftain MBTs began taking fire from the supporting T64s, but a support sortie from a flight of Lynx attack helicopters, pre-planned to arrive at a way point of the right, turned up on turn 5. It began attacking the T64s which had been positioned beyond the effective support range of the AA umbrella, flying Nape of the Earth. Holes quickly appeared in the defending formation. The casualties effectively eliminated the offensive capability of this Russian battalion. 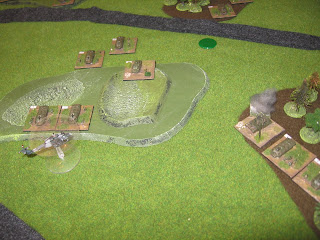 Soviet artillery (towed D20 and mechanised guns) had been attacking British units, but Division had allocated two battalions of M107s in support, and these had effectively silenced the Soviet artillery.

The British Electronic Counter Measures unit however had been singularly unsuccessful in locating the soviet air defence assets. The SAM 2 battery was beyond the effective range of the M107s, and none of the other air defences had been located. With the ground situation of the British looking dangerous with the attacking tank battalion,  the British commander called in air strikes by two flights of harrier GR1 aircraft armed with Rockets. These two flights evaded a significant air defence umbrella, but the jinking meant that they inflicted no casualties on the tank battalion. 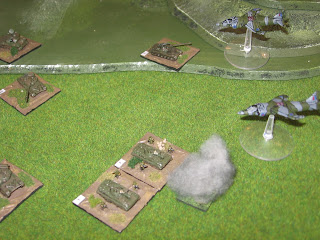 A fierce armoured duel developed between the troops of Chieftains and the companies of T64s, but the British gunnery proved too much and the battalion was reduced to no more than its ZSU 23/4 and the HQ platoon. Even with the failure of the air attacks, the British left flank was secure, and able to,push on to the high ground to the left of Neiderburg. 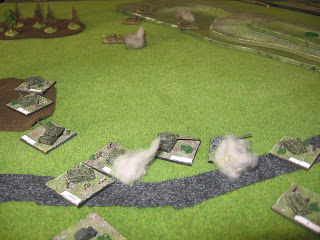 Finally the Soviet air defence Gaskin was located by the ECM unit, and a battalion of fire was brought down from the M107s, suppressing but not destroying the platoon.. 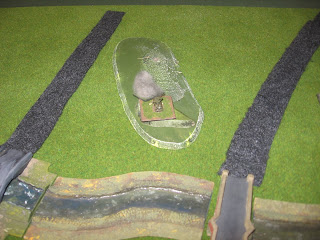 Soviet platoons occupying a village to the front of Neiderburg finally revealed themselves, but it was too late, and the Soviet forces began their withdrawal across the river.

The British attack had begun with limited objectives, and all of these had been achieved. Crossing the river would require a bigger effort from the entire Division. 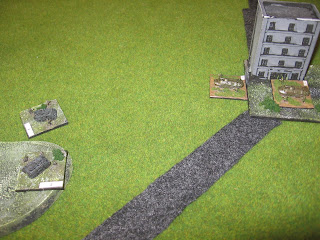 The greatest British success lay in the use of artillery assets to suppress the indirect fire assets. Both the Soviet artillery battalions, and the battalion 120 mm mortars were neutralised effectively. The British definitely won the counter battery war, although the performance of the ECM unit was less than satisfactory. The SAM 2 battalion located earlier in the game turned out to be beyond the effective range of the M107 battalions, and the other air defence assets were located too late in the game to be targeted and neutralised. By the end of the game almost all indirect fire missions had been used.

The use of the attack helicopter flight to support the British right flank proved effective, and meant that the right flank was never in danger.

The British left flank certainly had one of those 'get out of jail' days. Despite the amount of fire it put out against its Chieftain adversaries, it inflicted very few casualties, and the Chieftains had a 'day at the range', destroying almost the entire battalion for the loss of two Chieftain troops. Keith's dice were cursed it seemed.