Three weeks. Three hot stinking weeks sweltering in the heat, three hot stinking weeks choking on the dust of this poxy land. And all for nothing. Ahmet swung his legs across and sat on the edge of his cot, wiping his sleeve across his brow. Another day. Another day spent swallowing the dust of Palestine. The very thought had the vapours rising in his blood already. Shouting from across the encampment drew him from his deep reverie, and his valet burst through the tent flaps.

"Calm down man, stop gibbering. Tell me what has happened."
"The undead, the possessed, they are here. They have appeared across the plain, conjured up by the wizards of the almighty."

Ahmet had set off with the blessing of the Sultan, conquest and glory in his mind. But the elusive Egyptian army had eluded them. Now, finally, was the chance for glory. Today the might of the Grand Turkish army would be tested. And he was determined it would not be found wanting.

This was the first Big battle HotT outing for my newly completed Turkish VSF army, facing off against Andy's Semi Historical Egyptian army. 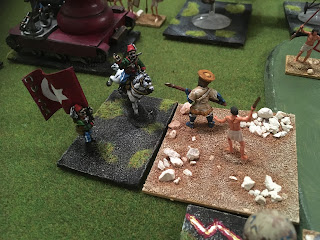 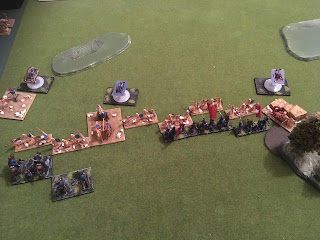 And so the battle ends, with the Egyptians having lost their CnC and more points than the Turkish army. Some photos of the state of play elsewhere along the lines at the end of the battle. 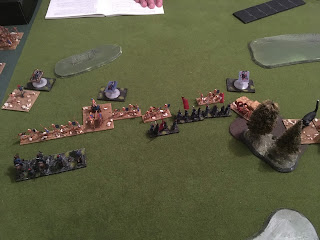 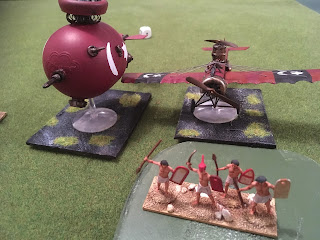 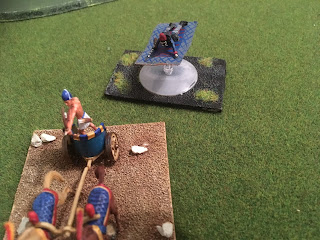 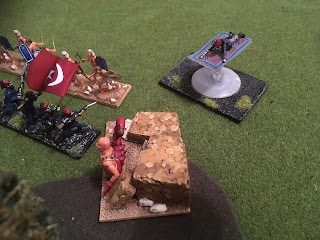 What a great game. The battle was eventually decided on the Turkish right, but it was close. There were only 4 APs in it in terms of casualty differential when the Egyptian CnC fell.

An excellent first outing for the Turkish army. It is rider heavy, and against Andy's Egyptians this makes them vulnerable, he has quite a few spear. This meant that I was more cautious with the mounted than I might otherwise be. But it was well fought nonetheless.
at March 10, 2018 1 comment: