It's fascinating (I think) to ponder what has inspired us to take up our hobby. I wrote some time ago about Commando comics. Here's another thing that really inspired me.

My Dad was a Fitter and Turner, and a model maker extraordinaire. However he didn't make his models from plastic kits. He used wood and metal, parchment and plexiglass. I still have some of the wonderful models he made, many of them from plans that would arrive with his subscription to 'Hobbies Weekly' fresh from England. These included a lighthouse, a church, a swiss chalet, and.... this model of the Golden Hind. It sat in our 'sitting room' (as they were called when 'I were a lad') and I have clear recollections of being mesmerized by the model. 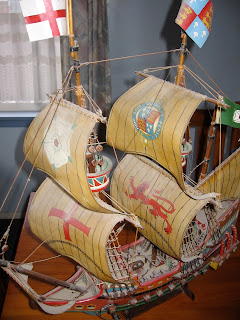 You may be able to see here the cannons, and the lifeboat complete with oars (all hand carved) beneath the layers of dust. 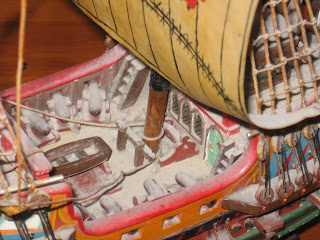 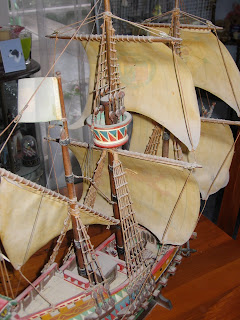 There is also an A13 tank in what must be about 1/32 scale I guess, that sat on my tallboy as I grew up, and I clearly recall imagining this giant machine going into battle. Today it sits in my study at work. I keep it there to remind me of what it was like to be a boy, in the hope that I will deal with boys sent to me with a degree of humanity that I rarely saw when a lad at school myself.

These were things that inspired me, although perhaps it was my Dad who inspired me more than the models themselves. I'm certainly glad he did.
at March 13, 2010 3 comments:

Another Friday night with good friend Adrian, and a little Volley and Bayonet action. Out came the 25mm Napoleonics armies. Now these armies are actually older than most of the 'gamers at our local club, and were painted by various of us, at a time when shading and washing were unknown to the average 'gamer; we just block painted them. They may not be up to modern painting standards, but there is a certain nostalgia involved in using these armies, we like them.
So, the two armies (Spanish and French) faced off against each other. The armies had been composed by fellow 'gamer Jon using the VnB Road to Glory points system. However we didn't use the RTG Scenasrio system to generate the game itself. We are still in the 'throw down some terrain and let's get those dice rolling' mold. This first photo shows the armies deployed at the start of the action, French on the right, Spanish on the left. 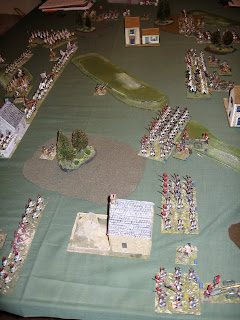 The armies advanced against each other, but the Spanish (OK, that was me) reached a defensive position and made it clear they weren't going much further at this stage, so it was down to Adrian to attack with the French. Here the French and Spanish cavalry face off against each other. 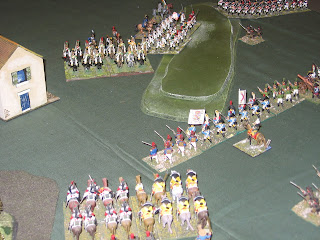 Adrian's plan was to hold the centre and drive in the two Spanish wings (a little Hannibal there.. and we don't mean 'Lector'!!). Here the French left approaches the Spanish right wing. 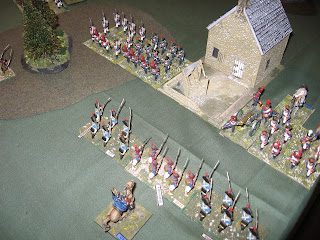 The attack was however bloodily repulsed by the Spanish, leaving the French left wing battered, and pulling back to a defensive position around the town on the flank.

The French attack on their right also went in, with cavalry supporting their infantry. This attack too was bloodily repulsed, with the loss of a complete French cavalry regiment. 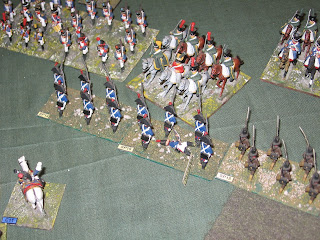 At this stage the Spanish became a little bolder in their action, and began to move against the French centre. Here Spanish grenadiers move out from behind a town sector to try to work their way through a gap in the French lines. 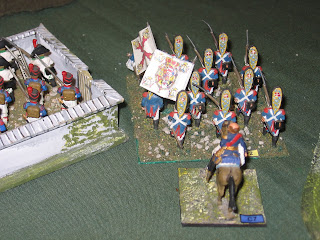 The French renewed their attack against the Spanish left, deploying a mass of skirmishers in support of the infantry columns, and this time their punch exhausted the Spanish defenders. The Spanish left was hanging in mid air, and the tension across the table was palpable (the 'gaming tension, that is, the players were still laughing and joking across the coffee pot).

Here you can see what is left of the French centre after the decisive cavalry action. 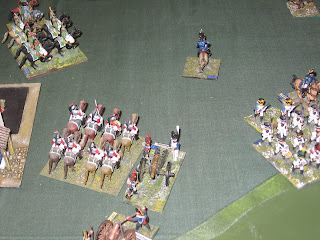 The two brave Spanish cavalry regiments can be seen at the top of the photo - that's the French rear (the photo is taken from the Spanish side of the table). 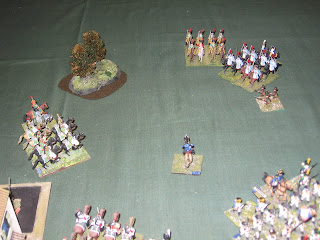 The French victory on their right had come too late to save the centre, and the French infantry divisions were forced to withdraw under cover of night fall. Another fantastic game using the Volley and Bayonet rules, but I've never known anything else with these rules. I'm always left feeling as if I've actually run a battle.
at March 09, 2010 No comments: