To General Stonewoltz death was inevitable. He had long been an acolyte of Antoine Charles Louis de Lasalle, that famous French Hussar who had reputedly said "Any hussar who is not dead by the age of thirty is a blackguard." He felt the pain of every one of his 43 years. Perhaps today was to be his day, as the Prussian forces edged through the forests of eastern France, the Bavarian division of the army in the lead.

The Prussian army had edged forward through the difficult country of eastern France, the thickly wooded ridge lines offering no hope it seemed for any decisive cavalry action for Stonewoltz.

This was yet another of our smaller Franco Prussia encounters, played using Keith's French and my Prussians, all Heroics and Ros figures. The scenario was developed using the scenario cards from the Volley and Bayonet Road to Glory system, and the VnB rules.

The Prussian advanced guard moved forward along the road and heavily wooded ridge, while the French were advancing along the main road to meet the Prussian attack that everyone expected. 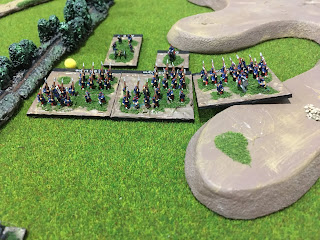 This was a fascinating and enjoyable game. Keith modelled the terrain loosely on that for the battle of Thann, 1809. It was unlike anything we had fought over before, and provided a totally new set of challenges. The Bavarians were interesting, and ended up being well placed. They are armed with the Podewils rifled BL musket. The performance of the weapon was well below that of either the Dreyse or the Chassepot, so we opted to use the rifled carbine stats to reflect this. This meant that the Bavarians were firing at shorter ranges. As it turned out, they were well suited to the fight in the forests.

The death ride of the Prussian cavalry was interesting. We are both averse to using cavalry in this way, but I thought I'd give it a try to see how effective they might be. It was actually a lot closer to succeeding than either of us would have predicted. However I may not try that again in a hurry.
at January 08, 2020 2 comments:

Ancient artefacts the object of a jolly good battle

First Kings of War game in quite a while, with Andy's Kingdoms of Men lining up against my Empire of Dust army, each at 1500 points. The scenario we were playing was 'Loot', determined on the roll of a die. We are still using KoW v2, having not yet bothered to update to the newest 3rd edition. Frankly, I fear the old rules creep that was so off-putting for various other rules systems that I have played over the years. 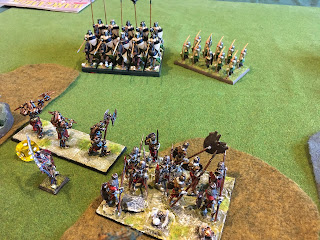 However it is the end of turn 6, and Andy controls two of the three loot counters, so a well fought victory fo the Kingdoms of Men.. but be assured.. we'll be back.. mwahahahahahahaha
at January 06, 2020 1 comment: