Another Tau incursion, and again the Cadian 198th was called to make a heroic stand against the invaders. Again the game was 1200 points, and the scenario was an objective based 'pitched battle'. I think I may be learning how to play the game, managing to go 4 turns, and inflict far more casualties on the Tau. However I lost my manouvrability and my capability to take objectives, partly trying to be too smart with 'Outflank' moves. I'm still pondering whether a) I am simply still no good at this outflanking (although in other game systems I can use it to great effect), or b) the outflank option may simply not necessarily be the best option to use with Guard.

Anyway, a few photos from the game. The Guard left flank, secured in some ruins, and supported by the Leman Russ. There was a covering squad further to the left, occupyung some woods. 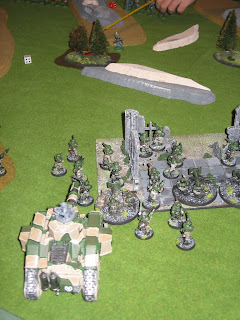 The Tau came on in their Devilfish, supported by a Hammerhead. The Guard had first move, and managed to immobise one of the Devilfish with fire from the Leman Russ. This effectively kept one Firewarrior squad out of the whole game, leaving them back close to the Tau baseline. 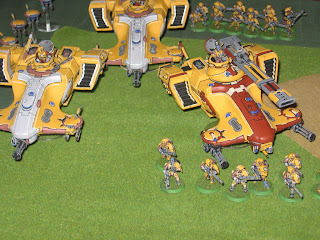 The Tau force included four suits (one was the commander.. a nasty wee brute I'd have to say). 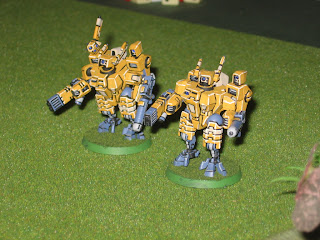 The Tau manouvrability meant that they still came on in strength on the Guard left flank. 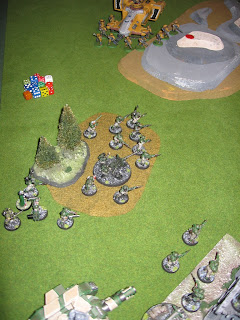 And the Kroot in the Tau centre and right were well supported by the suits. I managed to outflank with my Sentinels (a couple of Ork Kans doubling up as Sentinels). They had a shooting match with two suits, eventually dying in one outstanding Tau round of fire (one exploded taking two kroot warriors with it). 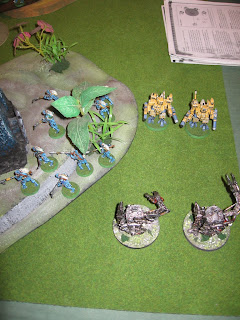 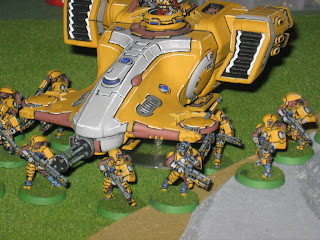 A Guard squad hunkered down in the ruins in their centre. 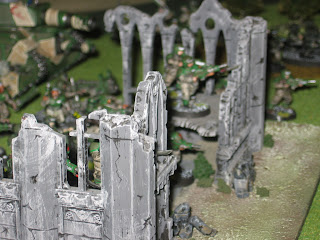 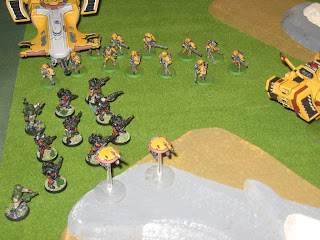 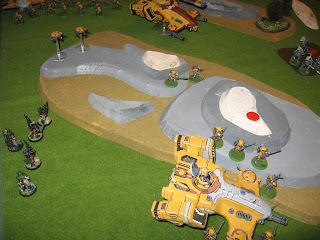 The Guard veterans rushed forward to attack the Tau left in the Chimera (a Rhino doubling as a chimera at this stage). The Chimera popped smoke and the vets disembarked. 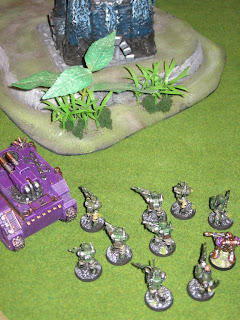 This was coordinated with the Sentinel attack. However the distance was actually too great for them to support each other. 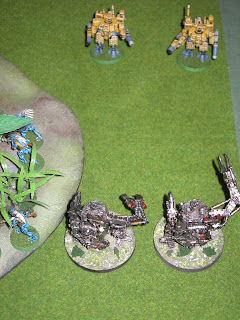 One Devilfish, having dismebarked its load of Firewarriors, rushed back to pick up the other squad which had carelessley lost its own Devilfish. This was a shot too tempting to resist for the Leman Russ - side armour and all. The shot went over however and hit the already immobilised skimmer in the rear of this photo. The Devilfish promptly exploded, but the still mobile Devilfish, loaded up with troops, survived.. a juicy opportunity lost!! 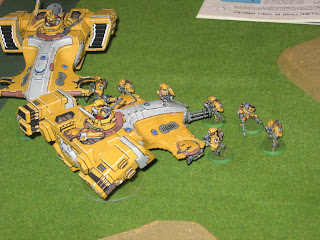 The vets, despite the cover provided by their chimera, fell to a pile of fire from the suits, as did the chimera. 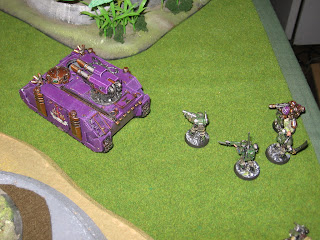 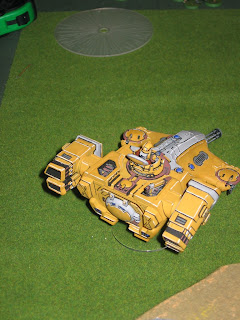 Heavy fire on the Guard centre now told, and the squad here failng morale pulled back form their position.

The Tau held 3 objectives to the Guard 1, a clear victory for the Tau.

What did I learn?

Defginitely heading in the right direction though.
at January 27, 2011 1 comment: