Trying to rediscover the painting 'mojo' of old, I'm getting through those little projects that have sat around for quite some time. Earlier today it was the Irregular 20mm WW1 artillery, this evening it's two battalions of 6mm WW1 Russians, ready for the Great War Spearhead battlefields. These were the left overs from my first order (which I place a couple of years ago as I recall); a long way from the 2 divisions that the Scenario Generation System demands for the Russians, but it's still another couple of battalions.

I quite enjoy the Russians: taking some regiments as random morale creates a very characterful force that can do some unexpected things (like stick around to fight to the bitter death, or run away with a third casualties.. either way it's the stuff of movies, and memorable wargaming moments).

So just a couple of shots of these stands.. more for my own satisfaction than anything else. 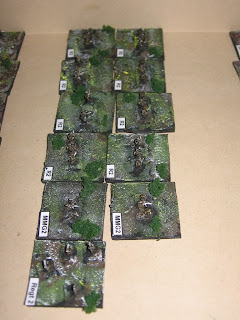 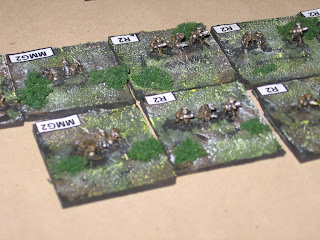 The push to catch up on the piles of unpainted lead continues, with four WW1 artillery guns that I bought several years ago. The guns come from the Irregular 'Really Useful Guns' range. More photos can be found on my web page 'The Great Adventure'. Go to the Photo Gallery.

The first two guns are German 150mm, the 'workhorse' heavy guns of the German army. 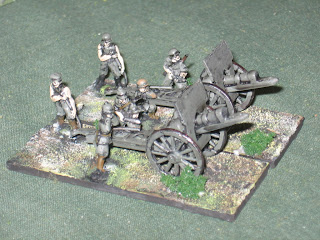 The second two are British 6" howitzers, with the characteristic lack of gun shield. 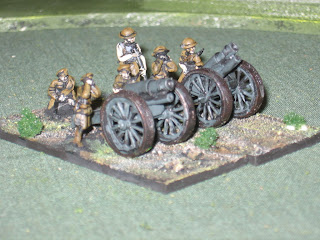 Final game before the Christmas season begins, and it's a clash of mighty empires as Hittite and Egyptian kingdoms collide. We were using Adrian's 15mm armies, and the Armati rules. I commanded the Hittite army, with the green bases, while Adrian commanded the Egyptians with the brown bases.

Each of us had our heavy infantry in the centre, with strong chariot units on the wings each supported by our lights and skirmishers. In Adrian's case he had a series of bow armed heavy units that he interspersed with his spear. 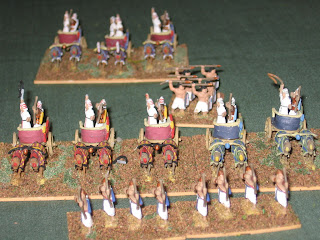 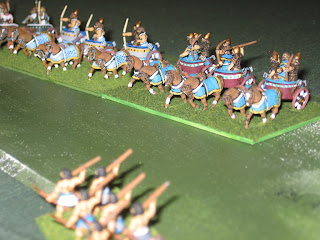 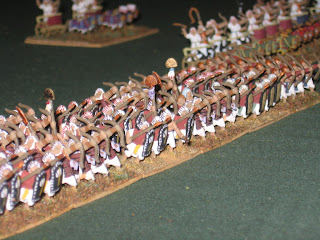 The action predictably opened with the lighter troops on the wings, each of us vying to win the battles here and turn the flanks of the chariots. I managed to win the battle to control the right (and eventually the left too, but too late to influence the main event in the centre). 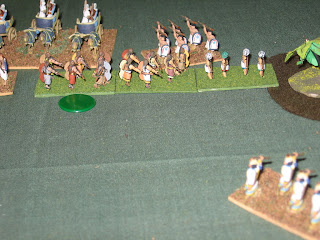 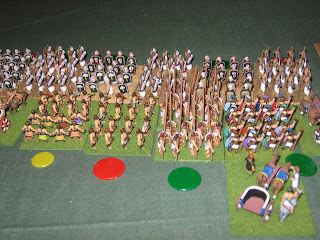 The action looked as if it was going to go the way of the Hittites.. the Egyptian line seen on the left in the shot below, thinning out as the Egyptians lose valuable heavy units. 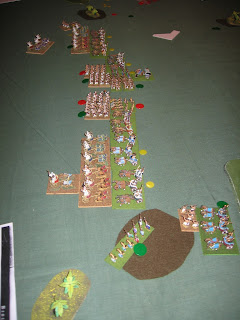 My victory on the right had even allowed me to flank the Egyptian chariot line. 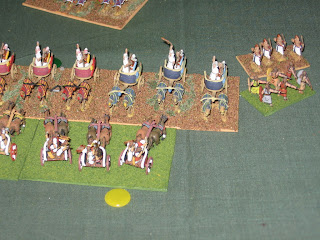 However the centre crumbled... five 1's in a row for combat, and I lost every combat on the crucial turn!!!


Below is the Hittite general, having attached himself to a Hittite spear unit, still managed to not win a single combat in the entire game!! 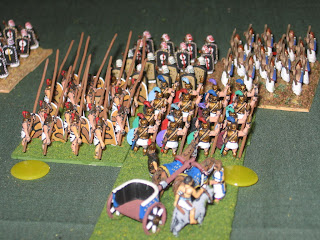 However another great fun game.... and a suitable finale to the year. A few more games to be had, but not before some serious feasting, and generally good times with family and friends.
at December 22, 2010 2 comments:

With work winding down for the Christmas break, I've managed to get stuck into quite a few painting projects (actually finishing several projects that I'd started over the past few years - more later), and we also managed a couple of games over two evenings at the end of the week.

Of great interest was my first ever game of 'Lost Battles' (the games system designed by Phil Sabin). Andrew Taylor ran the game, and Keith hosted it at 'The Wargames Room'. 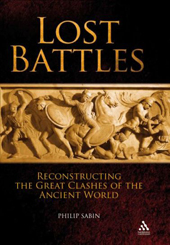 Andrew wrote up a good after action report, and Keith has posted it along with a few photos. The game system was very interesting, and I'd like to play some more. It simulated a number of aspects of ancient battles that I've read of in various contemporary accounts, and the game also look amazing with Andrew's 60mm wide bases packed with 6mm figures, so this really looked like a battle from a 'birdseye' view.

On the following evening we also managed several Wings of War games. I've posted on this game system beofre, and all I can  add is.. I really must get in to our local supplier (Comics Compulsion) and buy a couple of the box game sets of my own. I'm also tempted by their WW2 version of the game, so look out.
at December 19, 2010 No comments: