A spokesman for 21st Army Group has reported yet another successful pinning attack by 7th Armoured Division to the west of Caen.  Designed to hold German forces in the area, a surprise attack in Brigade strength was launched soon after dawn. Several battalions from the division's infantry brigade launched a silent attack towards known German positions, pinning the defenders in place to allow British artillery battalions to wreak devastation. One of the limited aims of the attack, according to the spokesman, was to locate additional German artillery assets and bring them under fire in order to further weaken the defenders material and moral strength. Strong medium artillery units quickly located one of the rare German rocket artillery units, and destroyed these units in place. Other German artillery assets were also identified and neutralised. Moderate casualties were the price for the longer term strategic goal of forcing the German invaders form the continent.


This was our first WW2 Spearhead game in far too long. Keith and I had forgotten far too much, and also managed to have a darned good yarn in the process of playing the game towards a conclusion. Truth to tell, my British undertook a deliberate attack against Keith's German defenders and, having forgotten to use a pre-planned bombardment (how stupid is that for a veteran WW1 general!!) my troops were actually pretty much 'hung out to dry' attacking dug in German defences. The defenders were thin on the ground, and both of us made a few deployment errors. We are hungry for more games, this was a huge amount of fun, with plenty of laughs!
at June 02, 2012 1 comment:

Last of the unit fillers finished, based and added. The pit pony and wagon (I have several) fills out the unit of Shieldbreakers (WFB miners). This allows me to create larger units.. a second IronguardHorde maybe, perhaps a horde of Shieldbreakers for the Dwarven Kings of War army. 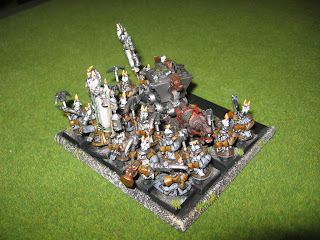 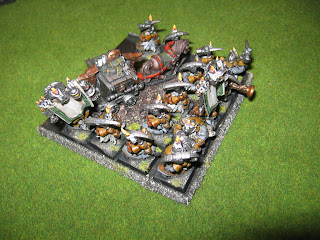 Still on the finishing spree.. some time  ago I bought some miscellaneous Fantasy figures (some GW Dwarves). They came with the spiders I painted recently. Not enough figures for a whole unit, so what was I going to do with them? I'd planned some unit fillers, figures I could put in the centre of a Dwarven block to pad out numbers. There were some Dwarf shooters (Ironguard in Kings of War terms), and some Miners (I'm using these figures as KoW Shieldbreakers). There was also the 'pit pony with wagon, I figured this could go in the centre of a unit of Shieldbreakers.

So here is the result. I have to base the pony and wagon, but apart from that ... 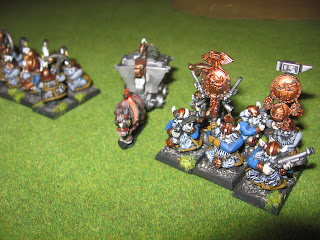 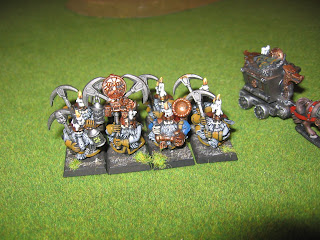 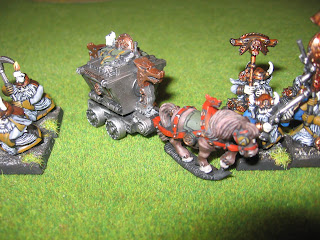 ... here's another job 'FINISHED'... I love ticking things off lists. Only problem is that in hobby terms, I keep adding items to the bottom of the list faster than I'm ticking them off.

I just have to stop trying to tell myself that I'm any different from any other 'gamer!!!


This week it was Kings of War again.. I'd added a unit of cavalry to the dwarves (Goblin Spider Riders as proxy 'fierce' berserkers. Andy fielded his Humans.. still only partly painted.. sigh!! 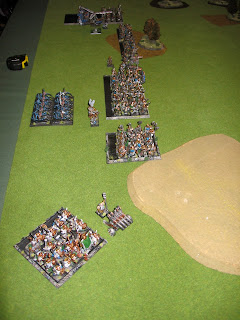 Andrew had joined us, and was very aggressive on the human left, pushing some Outriders in front while forming up for an attack with knights and archers. 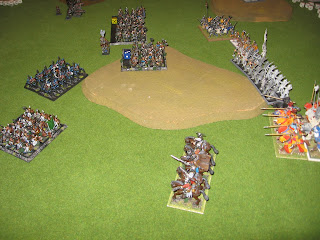 ON the human right, the dwarven left as seen here, I sued a steel behemoth (the Gyrocopter) in conjunction with some Berserkers and Ironguard, to destroy a unit of knights. 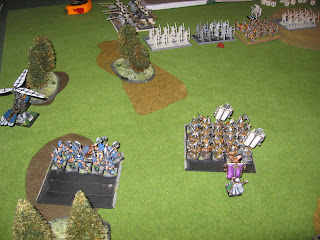 In the centre the Dwarf Ironguard horde advanced, supported by an Ironguard regiment, to attack the human centre. We'd already weakened the human right sufficiently to eliminate any threat to our flank as we advanced. 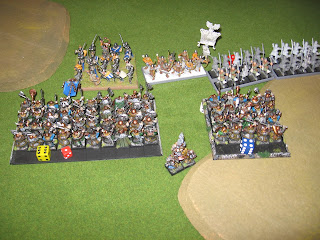 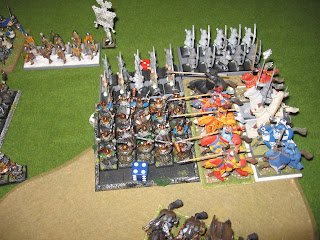 However we exposed out right to another unit of knights, I'd kept the Dwarven cavalry in reserve to guard the flank, but simply got my positioning wrong.. oh well. someone's gonna get hurt .. 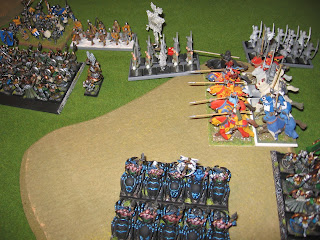 The knights were then able to take on the Berserker cavalry, but weren't able to eliminate them, and the game ended.. 6 turns just like that. 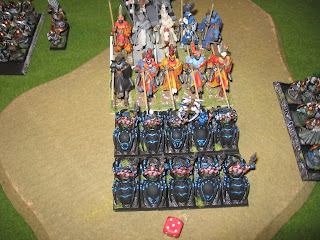 The game was a draw, even if Andy had got his points wrong, and fielded an under strength force.

The armies were meant to be 1750 points (well mine was, anyway). The buildings were scratch built by Andy.

A few shots from last week's Volley and Bayonet game, set in the Peninsular, with French vs Anglo-Spanish. Adrian took the Allied forces, and I commanded the French.
I have to say that this was definitely not my most stellar performance!!

The French advanced in typical glorious French style (how else??). 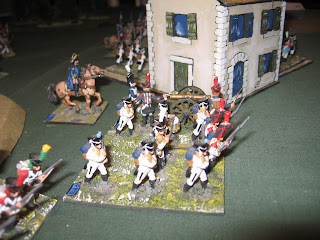 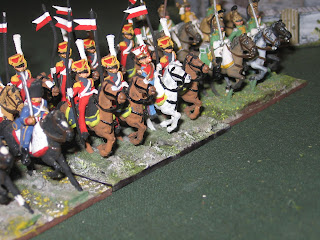 They occupied the double town sector.. and that's where the trouble began, 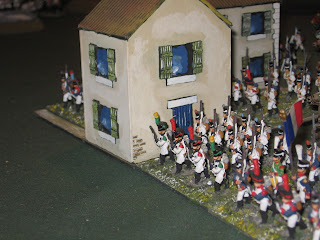 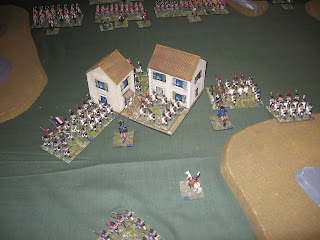 The British forces, including some Scots shock troops, assaulted the town, and bounced the French right out.. ouch!! 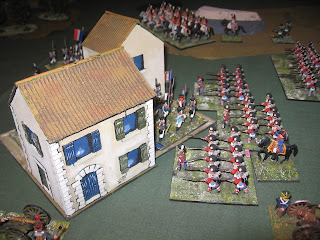 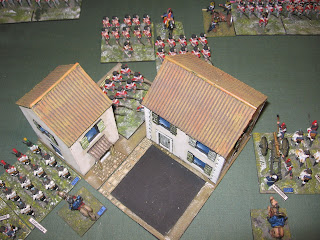 I advanced the French centre against the corps boundary between English and Spanish.. I was sure I sensed a weak spot. The French attack bounced the Spanish and British units, but were left with their flank exposed. Adrian is always ready to come to the party when issued with any tempting invitation.. 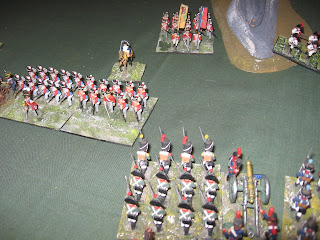 This flank attack was responsible for destroying n the French centre. 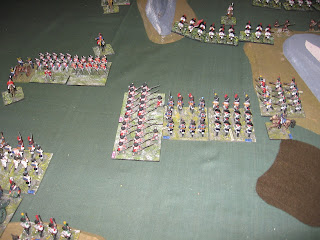 The French right had been advancing and pressuring the Spanish cavalry, exhausting the cavalry with fire. Adrian felt that the M4 cavalry was too weak to charge the French Brigades. 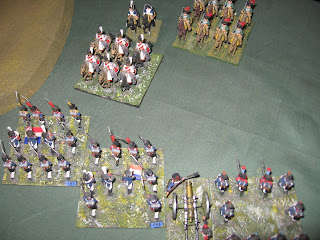 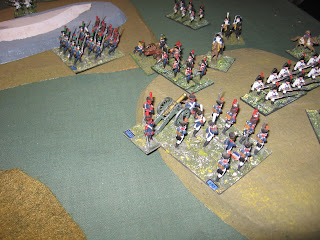 But with the French centre crumbling the fate of the French army was sealed .. as I said, not my best work!! 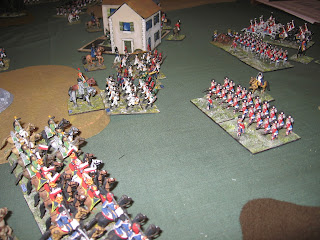 However for all that, another superb Volley and bayonet game. We fought using my 25mm armies. The buildings were scratch built.
at May 28, 2012 No comments: