It was a hot day's work in more than one way. A blustery Canterbury (New Zealand) nor' west wind throwing spring temperatures up around 30+ degrees C as Nick G and I played the first game in the new games room. We fought the 'A hot day's work' scenario from 'The Great Adventure'.

The scenario was written as a beginners' scenario for Great War Spearhead, but is nice and small, and very challenging for both players. As I warn in the scenario intro, it warrants replay as it can offer a range of possibilities and some surprises as I was to find out.

For a change of scene/setting I adapted the scenario to the eastern front, with two Austro-Hungarian regiments with artillery support attacking a Russian Brigade to take an important town at a road junction. Random morale rules were used for both sides.

As the Russian player I chose to defend the right flank, refusing my left. I occupied the main town sector in the centre, with a central reserve (seen at the bottom of the photograph below). I also kept a small right flank reserve in case of a flank march (the attacking player is allowed to do so). This reserve can be seen on the extreme right of the photo in the woods.


Nick chose to drive down his left flank. He'd set his plan before I set up my forces in defence. His assault would come in squarely against my defence. His right flank regiment was to hook around and assault and take Centreville.


In a bold move Nick pushed two companies into an assault against the town determined to take it. I have to admit I was fairly confident that I could hold the town sector, with three veteran companies (and my FAO) in the town. 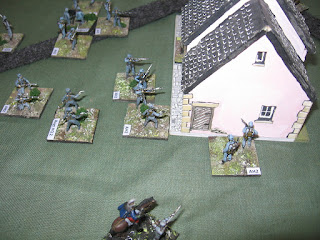 One of the assaulting companies was cut down by fire as it attacked. I now felt very confident.

However the other company went in and against the odds defeated the defenders destroying three companies of veteran infantry.


Nick occupied Centreville, the objective of the game. So I threw four companies of veteran infantry into the assault. I was however pretty sceptical, but this was an all or nothing moment. 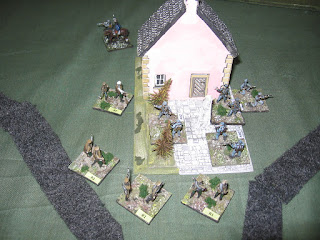 You guessed it .. The Russians were thrown back from the assault (of course in Spearhead terms the companies were eliminated).


It was clearly time to fall back to another position.

We opted to play this small scenario because we had only a small window of time in which to play, and of course there is often little more frustrating to a 'gamer than to get half way through a game and have to stop. You are left pondering all of those 'what ifs'. In this case there was no doubt about it, no what ifs.

It was an awesome wee game with no certainty of outcome. I have seen the scenario go both ways. This one certainly does reward refighting from time to time.
at October 07, 2015 9 comments: