It's late 1943 and the Russian summer counter offensive is underway. The town of Novosty in the Southern Front area of operations needs to be liberated, and the commander of an infantry division has been given the task. In support he has a break through battalion of heavy tanks (KV1s) two artillery battalions and two battalions of 152 mm howitzers allocated from the Front artillery reserve for counter battery fire. (This is a reposting of the original battle report which was accidentally deleted!!) 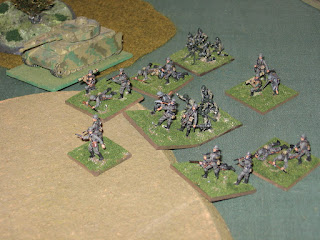 At this stage the German commander decided to commit his reserve battalion: infantry with armour in support. Nick had made an error in his cross attachments, hence the single tank stand here attached to a full German infantry battalion. 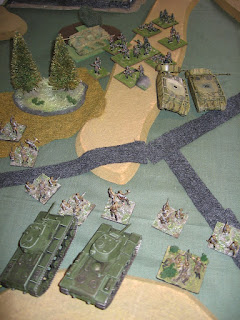 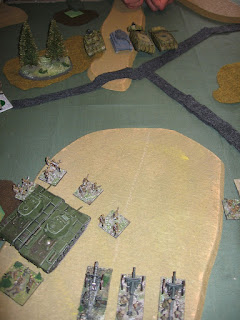 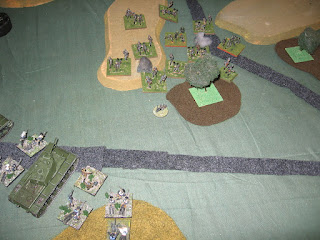 The actin on the Russian left was fierce. 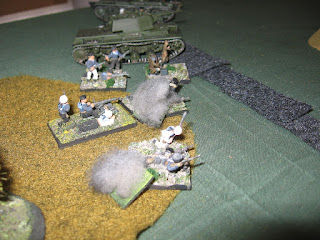 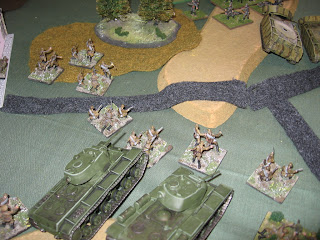 The Russian reserve is also well positioned to bring down fire on the flank of the German reserve formation. 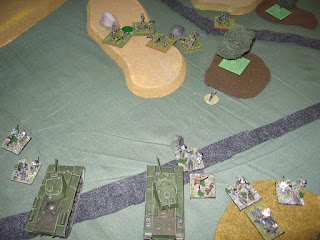 The position is lost and the German commander decides to withdraw his troops in preparation for another attack.

This was a great game. The forces were organised using Keith McNelly's scenario generation system, using forces of 350 points. The game was an encounter scenario. We kept the size down because the window of time available to us was limited.

I'm unsure of the size, as the loss of two stank stands severely impacted on Nick's battle plan. However he had made an error with cross attachment which, had this been done correctly, would have kept the armour in the game for longer.

Nick learned that he needs to concentrate his forces so that they can be mutually supportive.

I opted for a very conventional advance. I bought the main artillery as on board guns because of the communications difficulties that plague Russian forces. This paid off as none of the observer calls throughout the game were successful, but the one battalion firing over open sights decided the armoured engagement.

The force size may have been a little small, although we clearly avoided the 'track to track' problem that I am so desperately trying to avoid. Our next game will be 450 points. Keep watching.

Lost and the Damned outing #3

The Lost and the Damned seem to be perpetually lost and damned... funny that. Choosing to take on those tin men, the Necrons again, may not have been such a good idea, even though they say success in their previous meeting. This time we played 600 points, although we still applied the Combat Patrol force limitations.

On their right the Mutants ran forward to tackle the Necron left, supported by the two Traitor Sentinels. 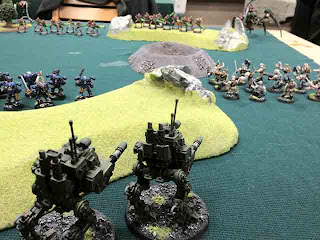 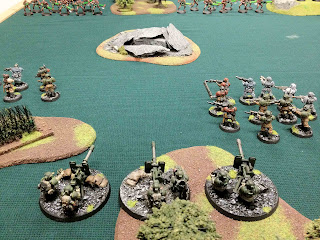 The mutants doubled forward ready to attack the unit of Necron warriors holding their left, but these were supported by a large Necron Stalker.. ooo darn, this may not end well. The Stalker assaulted the Mutants and the few remaining mutants broke and fled. 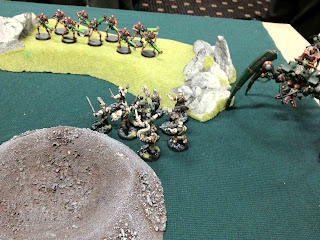 The Traitors on the left doubled forward to attack the Necron right, but those warriors were spoiling for a fight and after a round of Gaus Rifle fire they advanced to take the fight to the Traitors. 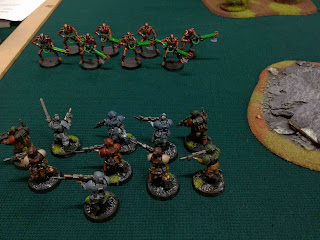 They quickly despatched that unit, but were then hit in the flank by the Traitors that had advanced in the centre. 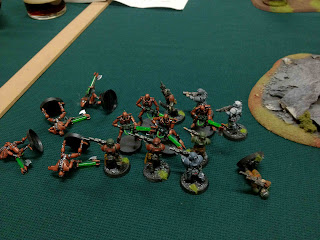 The Chaos Space Marines assaulted the Wraiths that had emerged from cover to protect the central unit of warriors. 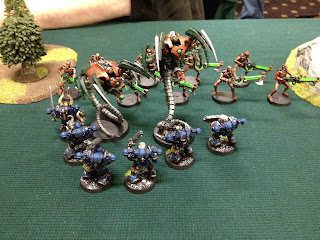 The Mutants disappeared in a wave of blood and gore, allowing the Necron left to advance. A battle developed between the Stalker and the Sentinels. 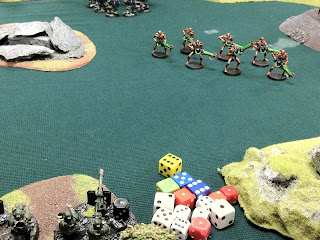 With Traitors and CSM's locked in combat, and the Stalker immobilized, the game came to an end. The L&tD casualties were significant with one unit of Traitors and the Mutants eliminated. All of the Necron units were still in place. The Wraiths had been reduced to two stands, and the Stalker had been immobilized, but each of the three Warrior units had lost only one of two figures.

I run hot and cold on the whole GW and 40K genre. I still think the miniatures are fantastic, and (again) quite some time go, when I was running hot on 40K I bought two Imperial Guard Sentinels. I reckon these look fantastic, very Star Wars. I finally got around to assembling them last week, and finished painting them today (in between bouts of holiday marking). They may even get a run around on the table tonight, as Adrian and I have a smallish 40K game planned. I can't say that I'm strictly adhering to any Lost and the Damned codex, and I thought that just as Guard troopers etc might well have gone over to the dark side, why couldn't a Sentinel squadron. 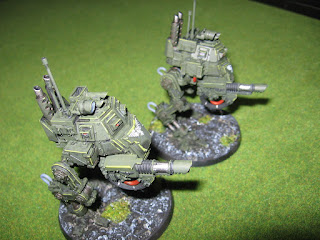 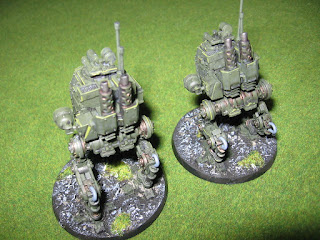 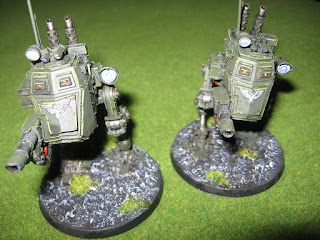 These two 'vehicles' can double up as a part of either a traditional IG army, or as a part of the L&tD army.. jolly good show, what's next?
at October 04, 2012 No comments:

And now for something ...

... completely different. I placed these zombie figures on the pins ready for painting a week or so ago, and then got sidetracked with the 20mm Spearhead modelling. However they had to be done as additions to the 20mm HotT Undead army. 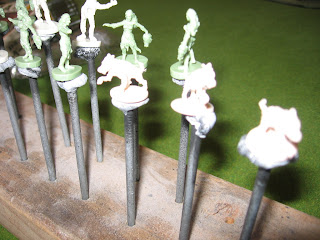 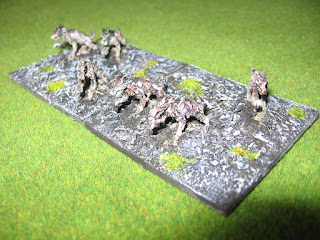 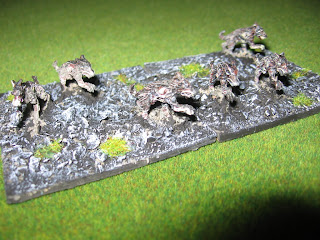 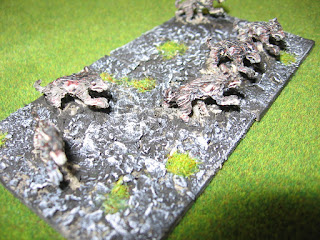 And three bases of zombie Hordes (these seem to be the 'flavour of the month' in our popular culture at the moment - no idea why,  I'm obviously missing something). 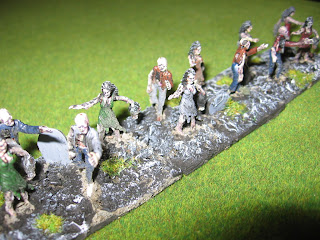 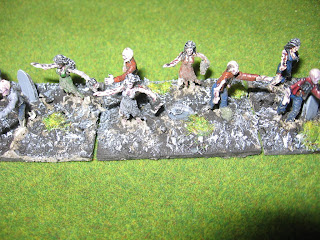 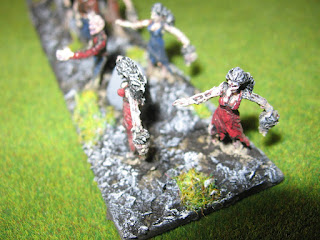 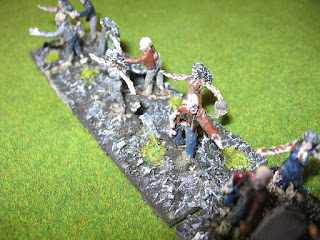 I have a bit of a plan to expand two of the HotT armies to three commands to play Big Battle HotT. The Undead and the British VSF are the likely candidates at the moment, with expansion 'sort of' under way with each of them. This one might take some time though with the other distractions around.
at October 03, 2012 3 comments: