White eyes, round as saucers, staring unblinking from smoke blackened faces. White eyes, deep set above sallow cheeks, trying to block out the yelling and the screaming, the smells of emptying bowels, and blood, the piteous cries of men calling for their mothers. White eyes, fighting the terror, staring unmoving into a past that would not be forgotten, a past that showed no respect for pips or stripes, for age or youth.

"They woz all over us" a voice comes from the middle of the group.
"Like a bloody rash" another mutters. A corpsman, walking amongst the sea of torn khaki and bloodied bandages, offers little more than solice to the bashed and bloodied men.
"How the 'ell did we even get away? Bloody miracle that woz." A murmur began, coming from parched throats.
"Righto lads, let's see what we can do eh?" and a tall solidly built man stood, the soft reassuring voice at odds with the more usual bellow that was expected with the crowns on the sleeve.

The scene was set for another Spearhead game, France 1940, with the BEF facing off once more against the German panzers. Except that this time they found an opposition intent on playing . a different game, an opposition determined not to be intimidated by their big Matilda tanks, and their heavy counter battery artillery.


The BEF plan was to advance to take Silly-sur-rive, a large town close to the local waterways on the right, securing the left flank at the river, with their centre holding a line close to the river. 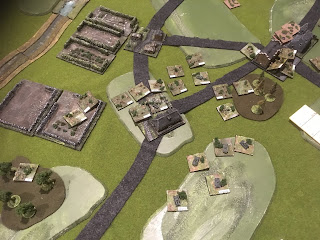 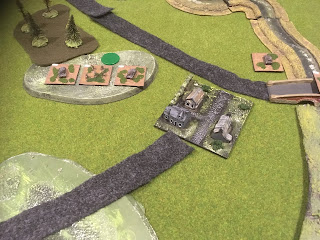 This was a masterclass in table top 'gaming. Keith had foregone his more usual panzer battalions, going instead for a more highly mobile reconnaissance battalion, and a motorcycle battalion to support a smaller number of panzers and Gerpanzert troops. He used the mobility, and the superior command flexibility, of the Germans to 'dance on the table top' like a ballerina on a stage.

The lateral thinking was impressive, the execution outstanding. This is how you deal with a heavily armoured but slow BEF.

What am amazing game, showcasing the ability of the Spearhead rules system to replicate battle in all its subtlety and nuance. This is what I love about these rules, despite the fact that I was on the receiving end of the 'masterclass'.

As Churchill said, "This is not the end. It's not even the beginning of the end. But it is the end of the beginning." We'll be back. ...