Next stage completed in my 400 point Combat patrol painting challenge, a squad of chaos space marines. I am using the list possibilities from the Codex 'Eye of Terror' which allows some troops choices from Codex: Chaos Space Marines (no idea what the new rules and Codices will allow).

I think these are 'Night Lords'. For some reason these didn't inspire me as much as the Traitors, so I'm not sure the paint job is quite what I would have liked. The old 'close up photography' is pretty unforgiving. 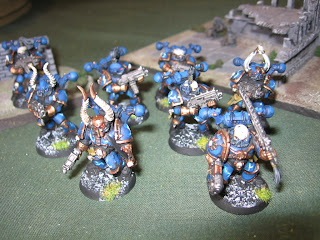 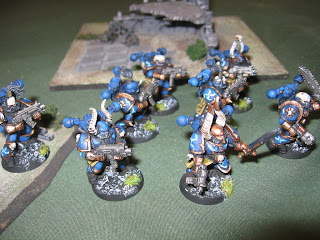 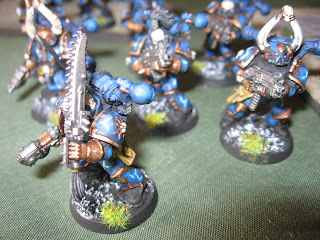 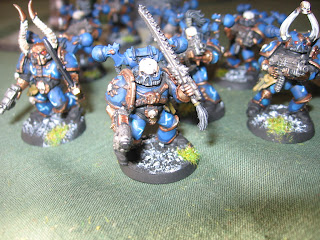 I need to work out the total points values now and see how close I am to the 400 points. But that's another project ticked off the list "To be finished". Now back to 6mm (from the sublime to the ridiculous?) as I have five stands of FAO and AGC to paint for the 1944 British.
at July 18, 2012 1 comment:

Today's progress (amongst marking and lesson preparation for term 3,  management planning for curriculum development, and walking the dog) on the 20mm Spearhead project. These are the Russians... and I've based up four Spearhead battalions, enough for two under strength infantry regiments (since that's what I have in my current Russian 1943 attack list). 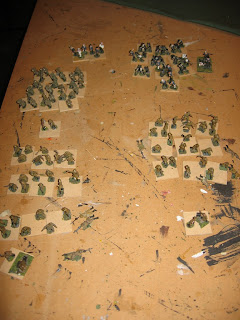 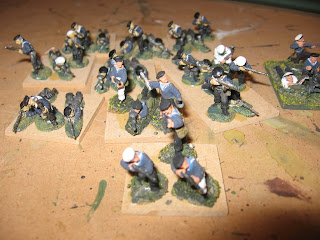 This is a command base from 20 years ago, again I have no idea which manufacturer they are from, but the officer is very cool, and I thought the motorcyclist was very appropriate. While it's not on a 1.25" square base, I don't think I'll re-base it, the existing base will do fine. The irregular base should have no impact on game play. 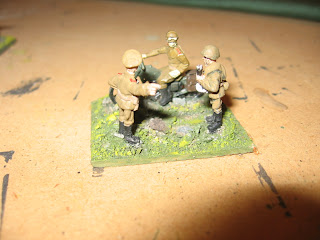 This has meant I got nothing done on the Combat Patrol 400 point painting challenge.. that's tonight's task.
at July 16, 2012 1 comment:

So this term break has been characterised by th goold old RnR.

Nick G, bless 'im, has given me a bit of a bug for the old 20mm WW2 as we have been playing Spearhead with 20mm figures. Normally I play WW2 games using 6mm figures, but there has long been this mass of 20mm stuff that has sat there un-used for almost two decades. I re-based German and British infantry for Crossfire, but the Russians have languished in their boxes (apart from those that I based for a Soviet HotT army last year).

I've decided to make a start. 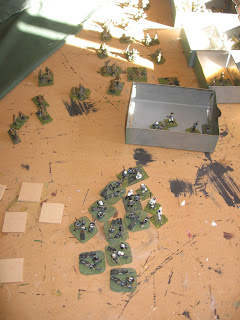 There are several drawers of the good old Airfix Russians: 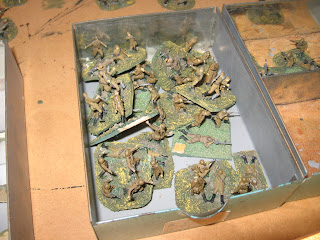 And a few Black Sea Fleet Marines (can't recall the manufacturer, lost in the mists of time, I'm afraid): 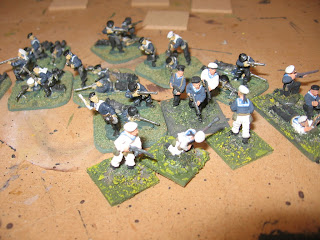 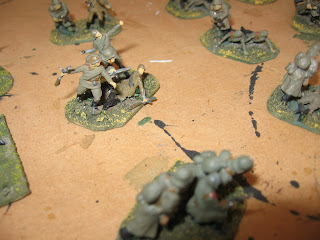 So I'll re-base them, and then they'll get a little re-vamp, after all most of them were painted in the 1970s. I'll most likely do a touch up of the paint, and then a couple of washes with Citadel Badab Black I think. That's usually enough to bring out whatever detail that they have. I'm not looking for a large investment in time or money, even though there are better Russian figures on the market these days, and I'd paint them very differently to the good old block painting technique that most of us used in the 70s. They just aren't  my main focus, but they might as well be used I reckon. There's the added bonus that I can use them for Crossfire games.

And as I've said previously with reference to my 25mm Napoleonic figures, these old style figures with their 70s paint jobs do have a certain charm.
at July 16, 2012 2 comments:

August 1944, and the British command believes that it has detected a weakness in German defences to the west of Caen, an area known as Les Quatre Villes for the four towns arrayed symmetrically down the highway. Elements of 7th Armoured have been given the task of reconnoitering the area, with orders to push on through if the opportunity presents itself. The Brigade commander has been allocated two motorised rifle battalions for the reconnaissance, supported by a regiment of 25pdr field guns, and two squadrons of the divisional reconnaissance regiment. He allocates one armoured squadron in support of each infantry battalion.

The day dawns with a typical Norman mist, keeping the allied air force grounded. Over night reconnaissance patrols have indicated the presence of two German infantry battalions in the area, but their strength was unknown. 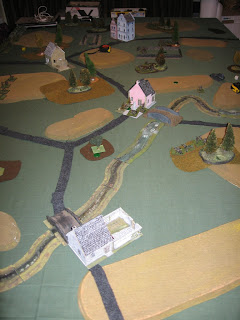 The defenders are spread thinly here as everywhere in Normandy, occupying only two of the four towns. 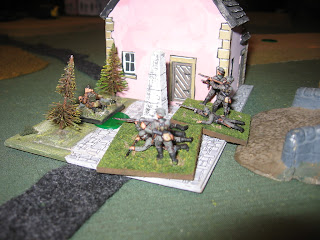 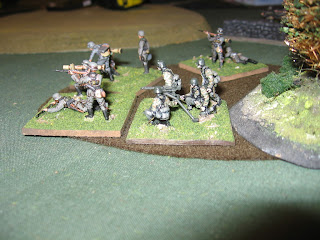 The British Brigade commander opts to attack through the centre of his area of operations, attempting to take the two central towns. 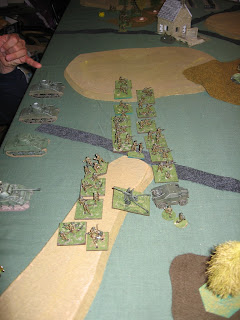 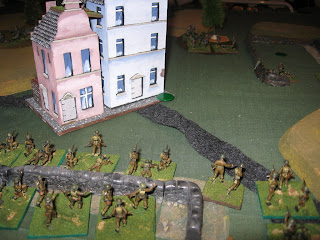 The right wing battalion commander hopes to take the first town with a 'coup de main', and rushes a battalion forward to seize the town. 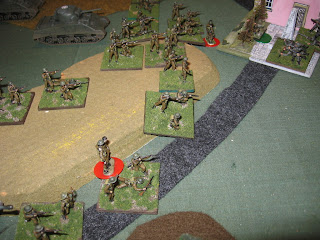 The first attack is bloodily repulsed as German 105mm rounds fall amongst the advancing infantry platoons. 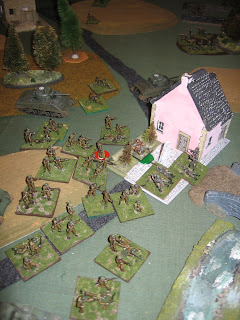 At this stage a frightening realisation hits the British attackers: this is no lightly held sector, as a detachment of German tanks rumbles forward against the British right. 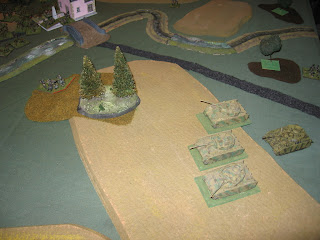 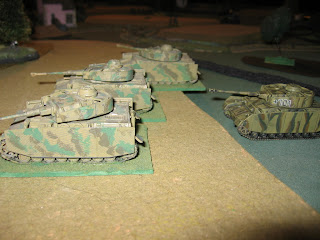 Feeling some urgency to take his objective the British right wing battalion commander throws in a second battalion against the town. He is aware that his own armour no longer has any AT support of its own and he can't predict the outcome of the armoured action that he knows is about to unfold on his own flank. 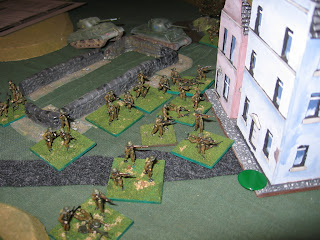 Simultaneously some of his supporting armour begins to push through against a weakly held German centre. The squadron commander is sensing the need for action. 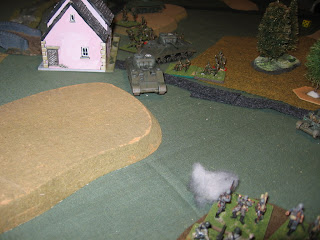 On the British left, the second British battalion has been more circumspect, but the commander here sees the opportunity to take his objective, and throws in an attack against the town. 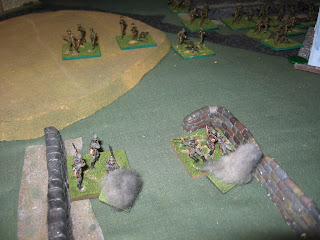 His attack here meets with success as the two German platoons defending the town are unceremoniously ejected from the area. 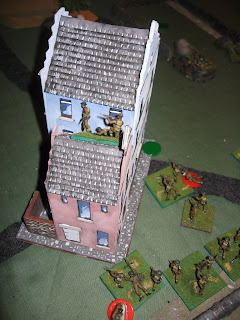 Meanwhile on the British right the German armour begins to make its presence felt, beginning action against the British armour. The Firefly section has no luck with its tank gunnery, but its German opponents make no such errors and the Firefly platoon is put out of action. This and the casualties from the second failed attack on the town leave the British battalion commander no choice but to withdraw. 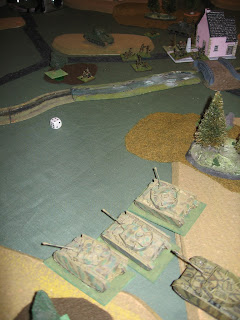 While a small gain has been made on the left, the reconnaissance has shown that the German defenders are stronger than had been believed. Taking Les Quatre Villes will require an attack in divisional strength.

The game was generated using the Scenario Generation System, and was played on an 8'x5' table using the enlarged ground scale +50%. We sued Nick's figures, all based on larger 40mm square bases (although the German armour was mine, commanded by Nick's newly completed Pzkw IV). We were trialling game sizes again, looking to avoid the 'track to track' visuals that seem to occur often in 20mm WW2 games. Nick fielded almost all of his available British force, and the German defending force was chosen as our best guess at what would be required to defend the area. The points were not balanced. Nick's force came to 387 points while the German force came to 370 points, clearly there were nowhere near enough British forces to attack a defending force of this size. To illustrate the disparity for those not familiar with the SGS, an attack list should be 650 points, while a defend list should be 450 points. We felt that the defending force was probably about the right size for the job on a table of this size, but the attacking force needed to be larger. We now need to assemble the forces and see what the resulting game looks like. We are looking for a balance of playability and aesthetics.

Certainly at two manouvre battalions the British force lacked the tactical options that an attacker needs. Nick really needs a minimum of three manouvre units to attack with any reasonable chance of success.

Additionally, the attackers were far too weak in artillery. Nick needed more field artillery (those good old 25pdrs), and also some 5.5" for counter battery work at least, if not for pre-planned bombardment. The German artillery had free reign, and was essentially responsible for the demise of the British attack on their right.

When all said and done of course, we played a very cool game with lots of laughs. Bring on the next one.