I'm in a tidying mood and that's dangerous. I came across this box of WW2 Rusian infantry in 20mm plastics that a good friend had given to me a number of years ago (his signal that he had foresworn figure 'gaming for the time being). He thought that they might be a good supplement to my own collection (which has since been rebased for the Crossfire rules). 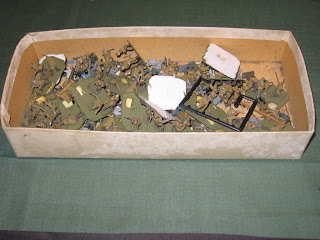 However what I did see was an interesting HotT army (inspired by a WW2 German army that colleague Tony created and used a couple of years ago). It would be different from his Germans though, as the Soviet army created HotT images of shooters, hordes, knights and more. So here is the start.

Sub-machinegunnrs based as shooters, and a couple of old T34s for knights. I also thought that given the image I have of the Soviet army of the time, maybe artillery might best be represented as a God, so there will be a base of shell explosions to represent artillery. 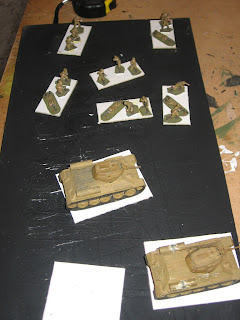 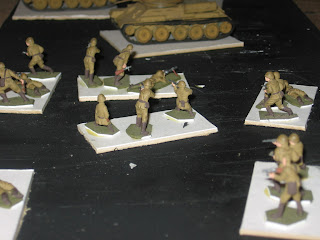 The figures were block painted, so there will be some 'tarting up' with a few washes etc to bring out the detail on the figures and improve their overall appearance on the table (I'm not repainting them though, this is all about re-using what I've got).

And, yes, following on from a post last week, I bought another three of those 15mm buildings. Here they are undercoated black, ready for painting. I just have to get the motivation to finish them, but that's the over-riding theme of this holiday break, finishing up projects, using what I have available, without buying anything new... YET!!! 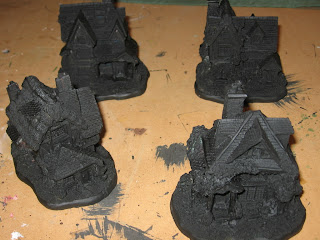