Overheard in the mess earlier in the evening, as Major General Caruthers introduced the newest arrival to his fellow officers:

'Let me introduce you to my young nephew Lieutenant Winstanley, my sister's boy, don't you know. Dashed decent young man, oodles of spirit and a bally hero to boot, eh wot!!'


Evans stands behind Winstanley because after all every hero has someone watching his back!!! 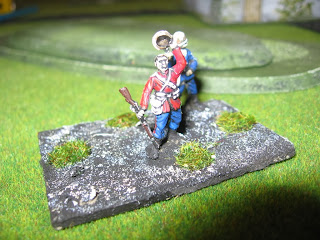 As I expanded the VSF army, I realised that in fact I would have heaps of troops, but possibly too few of the larger elements, and of course every British army has a hero amongst its ranks somewhere.

So, a Hero it is, making use of a couple of nicely spare figures .. there, that's another box emptied, another box I won't have to pack up for the pre demolition shift.
at January 03, 2014