The summer of 1914 was a time of rapid movement, and horrendous human loss, and nowhere more so than in central and southern Russia where the Austro Hungarian army advanced into Russia.

An Austrian division is pushing forward to cut an important rail link that might otherwise allow the Russian army to reinforce its defence further north. However a Russian infantry division gets there first, and prepares to push the Austrians further back from the rail line, and the railhead of Dubovitsa, to secure this vital rail head and line of communication.

This was a Great war Spearhead game played using my 20mm troops (almost Hat Figures, with some Irregular Miniatures Austrian MMGs bolstering numbers). Andrew, my opponent, is a Spearhead WW2 and Moderns player, but with only a couple of GWSH games under his belt a few years ago. The game was another in our series to re-familiarise ourselves with the rules. Hence its simplicity. 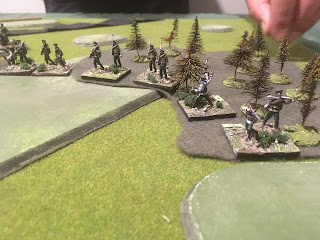 Sadly we had to call the game at that point (we'd run out of time). Our suspicion is that the Russian attack was likely to succeed, unless the Austrian die rolling saw a drastic improvement (even matching the statistical odds would have helped LOL).

These smaller less ambitious games are a great way to get back into GWSH. We will over time work our way back towards some mid war action with trench lines and preparatory barrages, but my aim first is to get a group of us sufficiently confident with the rules mechanisms that we can do so with relative ease. After all, those assaults take a lot of planning and coordination, even on the wargames table.