Action on the Peninsular... a 25mm Volley and Bayonet Napoleonic game

Another 'holiday game', in which the 25mm Napoleonic armies (Spanish and French) fought an encounter on the Peninsular. The armies were 3000 points strong, and the battle fought using our Volley and Bayonet rules. In setting up the table, I tried to create more open space (I tend to 'overpopulate' the table with terrain. I thought it would be interesting however to put down a river, with a couple of pieces of 'marshy bank' clearly marked. The river however completely shaped the battle, allowing the French commander (Jon) to adopt an unassailable position formed as he 'refused' his right flank after the initial deployment. Certainly it was beyond the power of the linear Spanish infantry to assault the French, which passed the initiative to the French.

Jon assaulted on his left, where he redeployed two brigades of French Guard (M6 Shock troops) in response to a Spanish attack. The Spanish division deployed on their right withstood the first assaults, but then fell apart to the French attacks. One telling factor was the relative movement speeds of the linear infantry versus the massed infantry. This allowed Jon to act more quickly than we could manage. 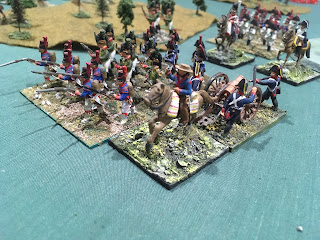 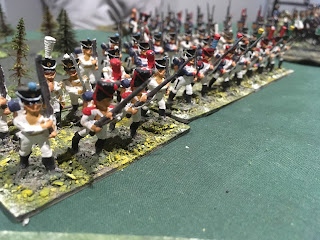 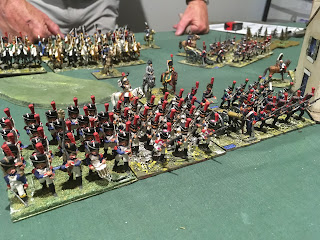 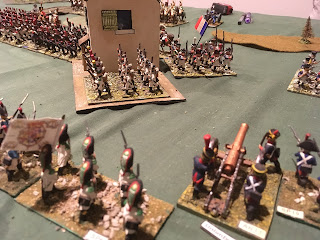 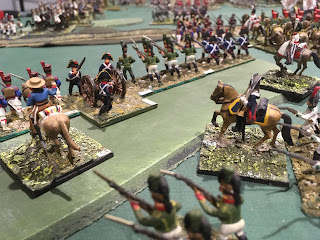 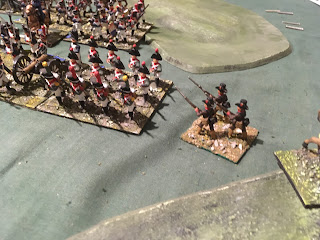 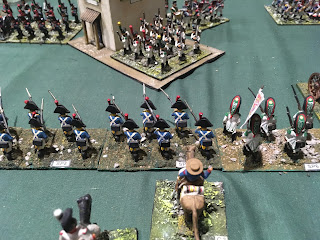 The terrain entirely shaped the game, so there was less fighting than we would have liked. However ot was still good to get the troops out on the table.

The figures are however now so old that 'metal rot' is setting in, and horses in particular are now beginning to break off at the 'ankles' (if horses had ankles, but I think you know what  mean). This is a diminishing force, as I won't be investing in replacements. It is simply too expensive.

I managed to fit in two games over two nights in my attempt to get a few games before the tyranny of work's time demands kicks in. The f... 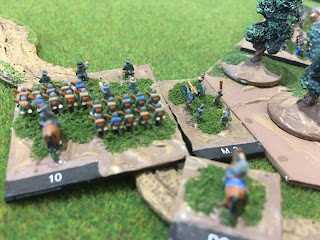