I haven't played Crossfire for almost 7 years, and for Andy it has been longer. We both have 20mm collections that are well suited to the game, so we got together for a couple of refresher games focussed more on re-familiarising ourselves with the rules than anything. Andy has some Italian paratroopers, and amongst my significant collection are some British paras, so we put these out. We stepped through a small action aimed at checking out mechanisms, and then tried a small British para platoon assault against the Italian paras. As it was essentially our first attempt, we kept it simple, allowing Andy two hidden stands. 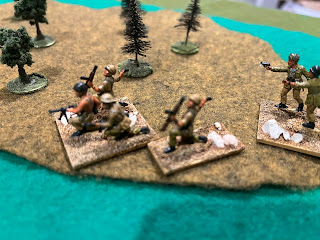 At this stage it is clear that the British para platoon has come up against a position that it can't take on its own, it needs more support. They say you need 3:1 odds in the attack, with good reason!!!

I'd forgotten how engaging these rules are, the pace of the action with the chop and change of initiative, the challenge of trying to decide where best to focus attention, the need for covered routes of advance, to win the fire fight, al of these things echo a greater degree of reflection of command than any other low level rules set, and we have been reminded of why we liked the rules.

Ever since I first tried Crossfire, I have had the opinion that they are amongst the cleverest set of rules I have ever used. That's why I like them. I'm just not very good at command!!!

Another batch of barbed wire arrives at the front...

Having worked out a look I am happy with, and having for a variety of reasons been absent from the. painting table for some months,. I have ... 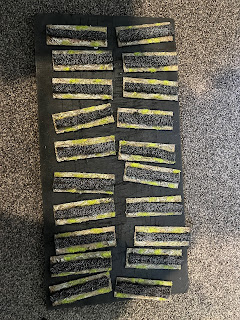