Game 2:
General Carruthers watched as his valiant troops pushed on past the still pulsating bodies of the thousands of dead spiders. There was a land to be conquered; no room for squeamish stomachs here, eh wot?!!!
The peace of the jungle returned as his troops left the battlefield behind, but more was in store. The spiders weren't alone in wanting to keep outsiders from this land. The British and German troops shared sideways glances as towering dinosaurs, and dark shadowy figures emerged from the jungle undergrowth. Bellowing dinosaurs, small and large, flying pterosaurs, and willowy tribesmen advanced on the Europeans.
The Lost Worlds army consisted of:
1 x magician
4 x blades (one was the general)
1 x behemoth
1 x God
4 x warband
1 x flyer
1 x beasts
Carruthers decided to try to hold the main defenders to his front, while flanking the defending line with his elite British riflemen; the supporting Martian horde followed in support. 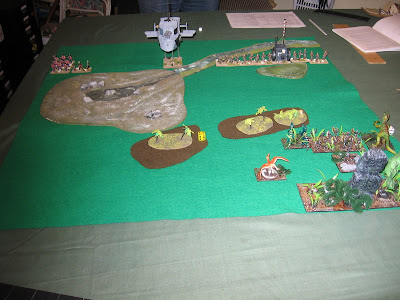 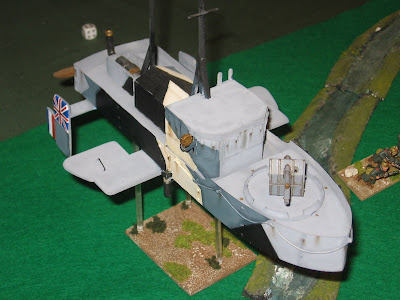 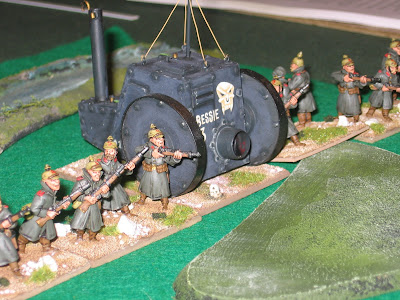 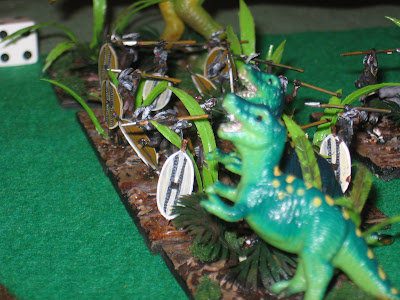 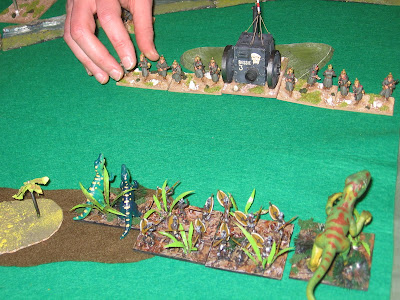 Action heated up quickly as bright bolts of magic hurtled through the air. In a blinding flash Carruthers disappeared, ensorcelled by the fiendish magician shaking bones and entrails from behind the lines of tribesmen. 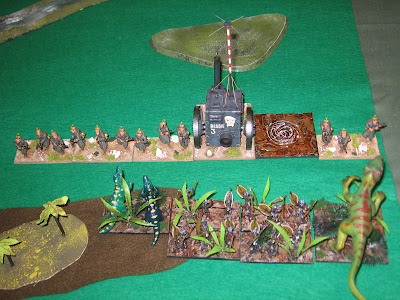 Action was joined as the warbands of tribesmen threw themselves against the lines of riflemen, supported by the bellowing tyrannosaur and beasts. Pterosaurs flew in and attacked the riflemen from behind while the tyrannosaur struck form the front, destroying a unit of riflemen. 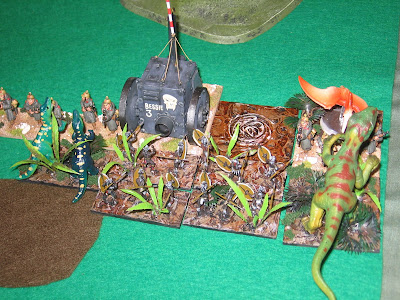 But "Bessie" the steam tank struck back, ripping a yawing hole in the Lost People's lines. 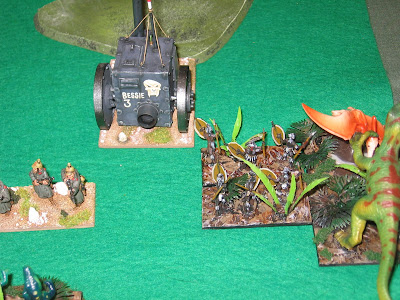 A swirling melee developed along the line, which resulted in Bessie and her crew being left immobilised in the battle. A roaring bellow announced the arrival of the great Ape God, but in the very next game turn the God disappeared again, clearly not too interested in supporting his worshippers today (boy, not my day with the Gods!!. the spider God didn't even show!!) 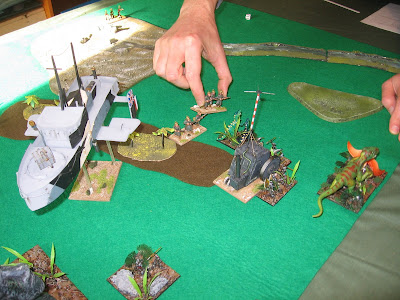 Both sides withdrew to reorganise after this hectic battle, Bessie needed attention, the Lost Peoples clearly needed to make further sacrifices to please the great Ape God. This wasn't over yet....
at July 07, 2009