Not another step back ...

It had been a hard week's campaigning for units of the BAOR. Repeatedly they were being caught out by sudden Soviet attacks that pushed deeper and deeper across the northern German plains. But this was not the Russian steppes, there was no room to trade space and time. The Soviet advance had to be stopped. Nothing less would do if the freedom of the western world was to be defended.

Our most recent game saw another Soviet attack against a British BAOR defence. Keith attacked with four Soviet battalions, while I defended with three BAOR battalions (two mech infantry and one armoured) with cross attachments across all three giving three combined arms battalion groups. I supported these manoeuvre units with Abbots, M107s for counter battery work, and M109s for more immediate heavy support. Keith supported his battalions with a range of artillery, and two flights of Mi24 Hind attack helicopters.

The British brigade commander opted to defend forward on his right flank, holding the left flank back behind a river line, occupying a key height on the flank. 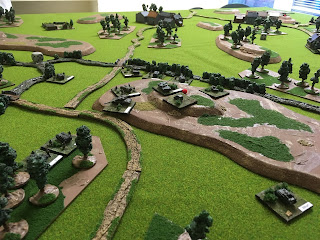 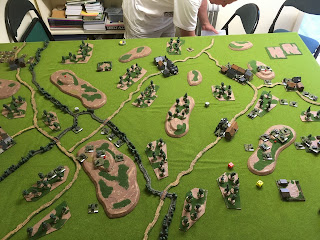 The Soviet attack began very quietly with a motorised regiment pushing forward on their right towards the British left. 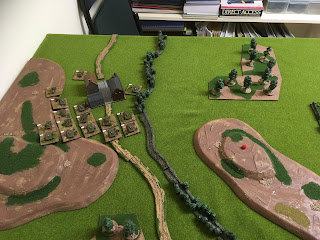 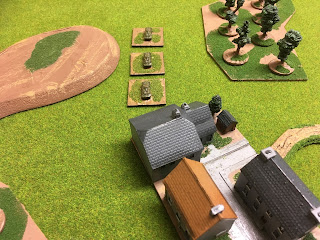 The Soviet advance towards the British left 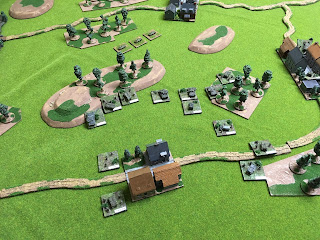 Orders rang out across the radio nets, and the armoured regiment pushed forward towards the still empty Soviet centre. 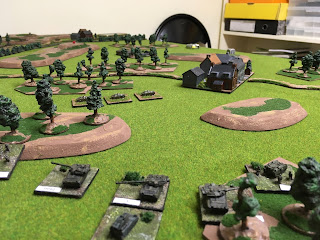 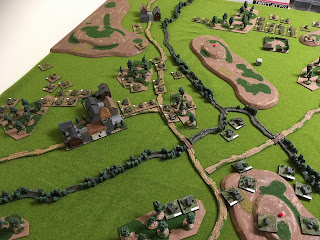 And the remaining regiments of the Soviet attack force advanced from reserve straight towards the centre. 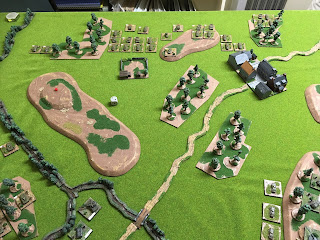 At this stage the thud of rotor blades echoed across the battlefield and British troopers looked up to see a flight of Mi24 Hind attack helicopters swoop along the road over the heads of the advancing Soviet troops. 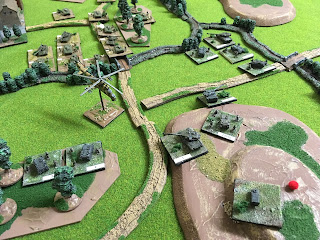 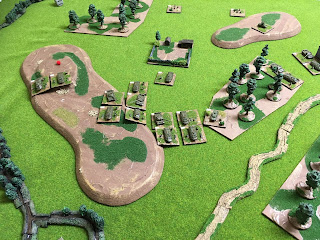 At tis stage the real actin began. British heavy artillery (M109s) called in by a forward observer struck the advancing Soviet battalion and inflicted heavy casualties. The Hind crews managed to inflict no casualties, and so Chieftain crews began to take a heavy toll of the Soviet T64 armoured supports. 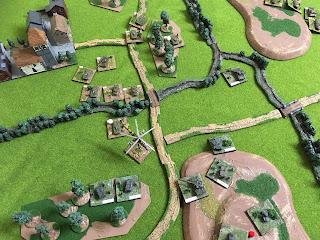 The Hind was initially shielded from the British Blowpipe crews by the crest of the hill. However the Blowpipe teams promptly re-deployed and began to fire that the Hind flight. 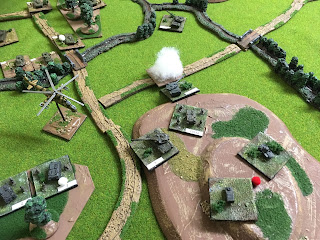 In the game context, the Keith managed three die rolls of 1 (the first two against Chieftain platoons) and the third against the Blowpipe team which became its target priority. On its fourth and last turn on the table it finally destroyed the Blowpipe team. However the effect was clear, the team had protected the armour from the helicopter threat. 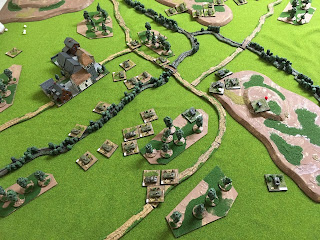 The British centre was exerting pressure on the flank of the Soviet advance. Supported by a FV438 platoon, it dominated the centre to the Soviet cost. 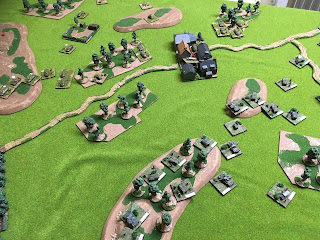 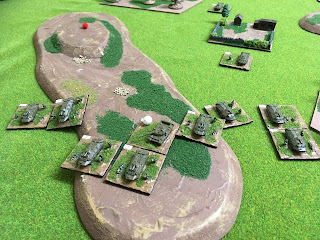 The British brigade commander now ordered his own right flank battalion into action, and the battalion advanced against the Soviet left which was thinly held. The armoured support was provided by platoons of T62s which were struggling to hold their own against the British Chieftains. 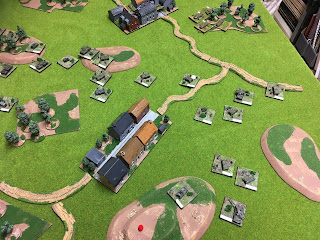 The British left flank battalion was forced to check morale, and passed. It was unlikely they would stand for much longer against the 3:1 odds that they faced. However neither did it seem likely that the Soviet left withstand the attack that was developing against it.

However the Soviet advance had been blunted. There would be not a single step back from here. The game was a marginal victory to Keith as I'd taken an option A while he had not.. there was just the 1 VP in it.

This was a very different play style for me, and it worked very effectively. Previously I had tried to exert the power of the NATO air umbrella, but Keith had worked out his own tactical counter to this. So I was forced to rethink how I would fight the battle. Artillery was more effectively used in support of the fighting platoons (although I still managed to mishandle the Abbot battalion), and I operated a much more mobile defence which featured bolder counter attacks on the table.

I have submitted a piece to for the next SOTCW Journal in which I make some broader generalisations and observations that may be of interest.
at February 05, 2017